Start a Wiki
This is an article about Hydie Croft, a character created by TheWoobieStorm. 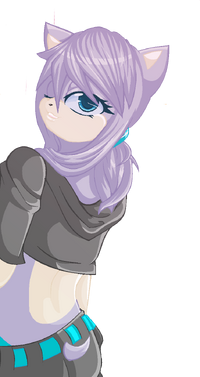 Hydie is a light lylac hedgehog, with hair consisting of two bunches on either side of her head and a ponytail at the back of her head. Her ponytail is held together with a glowing bright blue ring. Has slightly dull/pale blue eyes. She also has wild bangs at the front. Hydie is clad in a black sleeveless hoodie, a white tank top and a simple black pleated skirt, the belt the same as her hair-ring.  Her skin tone is a creamy almost-white: covering her arms, muzzle, inner ears and lower back. The design of her gloves are simple black with more blue threading. Her shoes are knee high boots with garters, a pouch on the left garter holds her hunting knife.

Hydie has a very fanatical outlook towards her idol and one-sided love interest; Shadow. She is the embodiment of a yandere; an axe crazy fangirl who's a lot more than just "off the deep end."

Hydie appears to be a somewhat cold character on the outside, but on the inside she's a mass of mixed up thoughts. She doesn't trust anyone, believing them to be evil and the only pure soul that exists is her. However, she illogically makes an exception with Shadow, whom she believes is her "soulmate." In fact, a lot of Hydie's behaviour is directly contradicting of her established personality, setting her actions and reasoning in stone is very difficult. She's unpredictable for all the wrong reasons. Hydie is also a massive fangirl when it comes to Shadow, she stalks him constantly. This is how she's able to find Team Dark and the other characters so easily. She's starts as an Obsessive Yandere, who'd kill anyone getting close to Shadow, then she evolves to a Posessive Yandere, in that she'd rather kill Shadow instead of letting him live around all the people he has grown to have a connection with.

She can't take anyone telling her she's delusional or that she's crazy, no matter how true it is. By the time she'd started confronting the heroes, she was already too far gone to have her mind changed. This includes a vicious god complex relating to her "purity," explained a bit more in the powers section.

Hydie is a power-type character, using brute force and an assortment of weapons to take down opponents.

Being a power-player, Hydie is all about blunt straightforward action, almost never taking a defensive stance. While she's not exactly that bright, landing a hit on her target's most likely going to give them a hindrous injury. She almost never fights empty handed, usually sporting an assortment of knives or a something akin to a metal bat.

Hydie is an intermediate knife user, so she has a few special knives on her, most notably her hunting knife she keeps hidden in her garter pouch. She also has a set of special throwing knives that have a 3 second delay bomb in the hilt.

Of course, Hydie may be a powerhouse, but she lacks a lot of the knowledge and tactics used by others in their fights. She's incredibly easy to outclass in this manner. As well as this, Hydie always has delay in between throwing her exploding knives, possibly due to their weight. A good number of opportunities will present themselves like this.

Her temper is rather mild usually, but bring up anything about her illogical actions and there won't be a fuse to talk about. She's easy to manipulate in this line of thinking as well, through things like blackmail and/or using Shadow against her (even if it's just word of mouth, say the right thing and she's putty in the manipulator's hands.)

She may be the most persistant person on earth, but even in the future timeline she still learns a minimal amount of information to assist her in combat, which is her most glaring flaw.

Hydie hasn't got any powers to do with offense or defense, rather, they're more of a reality warping type.

Hydie has been incapacitated and actually killed many times, but somehow she manages to always reappear exactly the same as before. Hydie herself says that her powers revolve around her thoughts that because she was pure, the evil in this world would not be able to touch her no matter what, and that she'll always be "the light enveloped in the darkness."

These "powers" are seen to most as some sort of psychic healing abilities, although it seems that as long as she believes she's going to live, Hydie can be dead and alive at the same time. While they're certainly psychic powers in origin, they're a lot more than just regenerative magic. So if you're looking at technicalities, Hydie can't really die. She's merely defeated.

To top it off, it seems this stops Hydie from aging, as by the time that 37 years have flown by and the majority of the Canon cast is old or getting old, Hydie always stayed 17 years old in her constant appearances. This is rather convenient for her as well, since it mirrors Shadow's immortality and allowed her to remain a constant opponent to him.

Hydie's "Stalker Love" theme represents her axe crazy yandere personality; she's delusional, madly in love and not afraid to act on her feelings if she feels threatened.

Hydie is made purely to be a snark character. She's not meant to be too deep or by any means a believable character, yet I've probably managed to turn her into one somehow. Originally, her design implemented the sideways V-shaped eyes, used in anime for comedic effect, where she never ever opened her eyes at all.

One thing about her in general is that I was in fact the very kind of fangirl she's made to parody, so I can connect with her easily out of bad experiences. A lot of the references I associate with her, as well as in any future characters really is based on all the things I like or previously liked.

She started out childish and dumb, now she's an adult-like character who somewhat fits the role she's playing.

January 2013 art of Hydie by Woobie
Add a photo to this gallery
Retrieved from "https://sonicfanon.fandom.com/wiki/Hydie_Croft?oldid=1799926"
Community content is available under CC-BY-SA unless otherwise noted.