Start a Wiki
This is an article about Hugo the Zobian, a character created by The Evilbreaker on 07/10/2013. 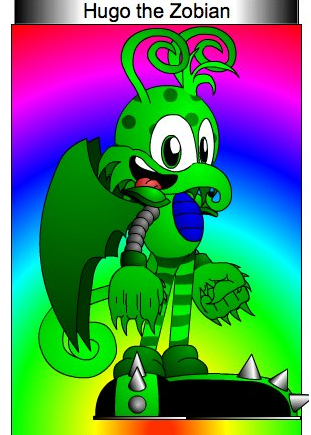 Hugo is the fursona of The Evilbreaker.

Hugo is probably the most unusual Zobian of the lot. He is Lime green, has curly ears, furry muzzle, snozzle as a nose, sharp claws, and even a blue shell. He has metal casings on his arms which somehow echance his laser powers. He wears metal shoulder pads to go with these. He also has striped legs and a polkadot head.

Hugo's personality strongly resembles that of The Evilbreakers, but with a few minor exaggerations. He seems to get very excited as soon as he sees someone he knows as a friend (as oppossed to E.B just getting happy). He also seems to be very weird at times (as opposed to E.B just being a bit weird).

As a toddler, Hugo was a very excited person. He was deeply inspired by the heroes of the Pulvix, loving how they could stop bad things happening by themselves. He was determined one day to become one. He was also excited by his very homeland, the Pulvix. He loved how he was living in "a big person", and would often laugh about it. He would sometimes play with his friends when they came to visit the Pulvix, which rarely happened because the only friends of his that he knew at this time were Wreck and Pilcrow.

It was simply an ordinary day in the Pulvix. Everything was going smoothly, nothing going wrong. Until 12 o'clock. A mass of blood-like soldiers burst into the Pulvix, along with some purple, black-eyed mobians of who knows what race. It was the two armies, of BloodLord and Lord Povenkios, teaming up to destroy the Pulvix. It was chaos. The teleporters were destroyed, so no-one could travel out of their section of the Pulvix, and they could only wait for the Povenkians and the Bloodarmy to take them away. Hugo couldn't stand that the heroes were not succseeding. He needed to take action himself. He called his friends, telling them that the Pulvix was in grave danger. Seeing as Pilcrow could teleport, he got there straight away and did what he could, but Wreck needed to use a public teleporter. Unfortunately, Wreck arrived late, but he was a massive help to Hugo and ¶¶¶, with metal flying everywhere, mainly into the faces of Povenkians and BloodMinions. However, the most difficult part was facing up against BloodLord and Povenkios themselves. It was a tough battle. Pilcrow was nearly severley injured, but with the help of the residents of the Pulvix, the two dastardly villains were defeated.

Hugo now resides in a house in the (recently repaired) Pulvix, occasionally having to save his homeland (or even world) from villains such as Eggman, or Secrevoid the Lavalord. On the holidays, he shall go out of the Pulvix to visit varius friends of his.

Unlike most of The Evilbreakers characters, Hugo doesn't have many powers. He has the single ability to shoot small lasers from his hands, but this is rarely used.

Hugo is incredible on the Violin (like E.B XD) and is on the final grade. (That's Grade 8, or grade 12 if your american [which you probably are]). He also plays the piano, and is 2 grades away from the last one. He has mastered the basic skill of Hand-to-hand combat and has also learnt to sneak around almost silently, but he doesn't really enjoy doing this.

Although Hugo can fight numberless armies for longer than anybody else, he finds it difficult to battle one person of immense power, as his mind is unused to facing one person alone, and one of so much power is a great weakness to him.

BloodLord.
Add a photo to this gallery
Retrieved from "https://sonicfanon.fandom.com/wiki/Hugo_the_Zobian?oldid=1798305"
Community content is available under CC-BY-SA unless otherwise noted.