The owner of Hoshimi the Undead Kitsune is currently rebooting this page. As such, some sections may change drastically.

SnowlessWinter, the author of Hoshimi the Undead Kitsune, considers this page to be unfinished. As such, some sections may change. 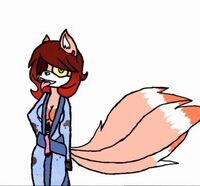 Hoshimi was born around April 1701, however the exact date is unsure due to kitsunes commonly hiding their birthdates. Her mother abandoned Hoshimi at birth, leaving her Mother Tree* to raise her. Hoshimi's Mother Tree, which she affectionately named Mai, raised her for around 8 years before Hoshimi was taken in by a group of priests and priestesses. This group of clergy worshipped the god, Inari, and believed he had left her for them to find. They pampered her and treated her like royalty, though Hoshimi normally brushed their affections away. She would visit Mai everyday instead of staying around the shrine and the two would train or talk. One day, while on her way to visit Mai, Hoshimi came up Jiro, a fellow kitsune that had been seperated from his family. She approached him and asked him to come with her, in which Jiro hesitantly agreed. Hoshimi brought Jiro to the priests and priestesses, who rejoiced at seeing another kitsune. Over the next 4 years, the two kitsunes grew close, spending almost waking moment together.

Retrieved from "https://sonicfanon.fandom.com/wiki/Hoshimi_the_Undead_Kitsune?oldid=1817008"
Community content is available under CC-BY-SA unless otherwise noted.