All is fair in love and war--and business is a little bit of both. 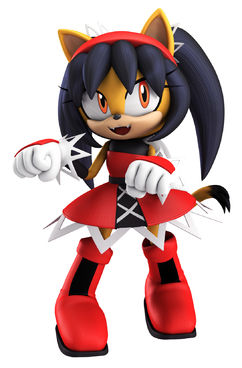 Honey the Cat is a character who appears in the Marshalia13 Universe. She is a mobian cat, fashion designer, and the founder and CEO of Honey Brand Clothes And Accessories. The mind behind her Honey Clothing label, she works to promote her products in any way possible. As such, she has participated in many fighting tournaments.

For her headwear, she wears a red hairband and elaborate white laced cloth-like hair barrettes around her ponytails. She also wears a red dress, black straps on the cuffs, a pair of white wings on the back, and white laces on the lower rim. Her dress also has black outlines around the waist, and a black area on her front skirt with white fasteners. Additionally, she wears white gloves with red backs and laced cuffs, black arm wrappers around her wrists and black and red boots.

Honey is upbeat and friendly, but also a determined businesswoman; going to such lengths to join a fighting tournament in an effort to advertise her products. She has a very strong drive toward accomplishment, even taking up martial arts just for the sake of giving herself more to do between her work as a fashion designer and CEO of Honey Clothing. Even when facing a problem, she has enough confidence to somehow get around it. However, while she has noble intentions, she can be quite devious in battle, but she seems to have thought little of it.

At some point, Honey would finish all her design projects and become bored. She would then decide to learn martial arts in her spare time. At another point, Honey met Mina Mongoose, whom desgined the clothes for Mina's first real concert and the two quickly became best friends.

In Sonic the Fighters 2, Honey is a playable character alongside the 13 other characters. In story mode, Honey took part in Breezie the Hedgehog's Chaos Emerald Championship in Casino Park along with the Sonic, Tails, Amy, Fang, Bean, Bark, Knuckles, Espio, Shadow, Silver, Blaze, Marsha and Julie-Su. Unlike most of her fellow competitors, Honey was interested mainly in promoting her new fashion line and struck a deal with Marsha to give the Chaos Emerald to the Freedom Fighters and promised to Honey that she would let her design the wedding and bridesmaids dresses for Marsha's wedding.

Honey is quite the agile fighter. With her "Shadow Sneak" technique, she can move fast enough in short bursts to create the illusion of producing multiple copies of herself to confuse her opponent. She also has the skills of the fashion designer she is.

Honey is a business partner of Breezie the Hedgehog to design clothes for her staff. Their relationship is quite professional but Breezie's approach to certain dangers makes Honey uneasy, seeing how Breezie only cares for how she benefits from popularity.

Amy Rose is the biggest fan of Honey, whose attire she recognized and was an old piece of one of her creations of the line "Dream-Casters". Honey was also delighted to see Amy wearing the look and was determined to re-launch it in Amy's honor as part of the "Rose Collection". Honey also admires her because she is her favorite Freedom Fighter.

Honey was somewhat disconcerting to Miles "Tails" Prower and proves to be quite intimidating towards him. Nonetheless, she still appreciates Tails' work as a Freedom Fighter.

Retrieved from "https://sonicfanon.fandom.com/wiki/Honey_the_Cat/Marshalia13%27s_Universe?oldid=1821182"
Community content is available under CC-BY-SA unless otherwise noted.