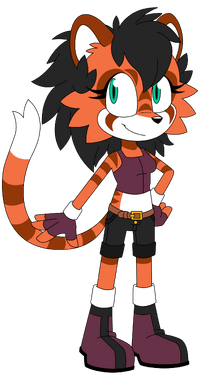 A lean tigress who stands a little over three feet tall, Holly has a short muzzle with a triangular nose, medium-sized, somewhat pointed ears, and a long, slender tail.

Her fur is primarily Chinese orange in color, with a white muzzle, eye markings, chest, stomach, and tail tip, as well as many citrine brown stripes decorating her back, thighs, tail, shoulders and face; her ears are citrine brown as well. Her hair, which is shoulder-length and sort of messy, is black in color, and her eyes are Caribbean green in color.

Holly is quite a bit stronger than she looks; while certainly no supreme powerhouse, she can hold her own in a fight quite well, and definitely has some experience in hand-to-hand combat, having been taught by her older brother Krieger. Being a tiger, she has great eyesight, and also has incredibly sharp teeth and claws; these she uses in a fight to great effect.

This genetic ability activates whenever Holly is burned, poisoned or paralyzed. When activated, it boosts Holly's speed and agility by about 50%. Quick Feet does not counter the damage-over-time effect from being poisoned or burned, nor does it counter the latter effect's drop in physical strength; however, it does nullify the drop in speed from being paralyzed.

Holly has no specific resistances to any Elements or energy-types. She is quite fast, and can easily outpace slower foes and evade their attacks.

Holly has no specific weaknesses to any Elements or energy-types. Her defenses aren't anything special, therefore she mostly relies on her agility to try and evade potentially devastating attacks.

Upbeat and charismatic, Holly always seems to have a smile on her face. She's well-known for being compassionate, and cares deeply for those she calls friends. Her charismatic nature tends to inspire her allies, and in addition, she is quite brave. However, she is also known for being stubborn, and will not willingly back down from a dangerous situation, even if she is at a disadvantage.

Holly has a bit of a quick temper, being easily agitated by taunts to the point where she may end up acting rashly as a result. She tends to hold onto grudges for a long time, as well, and doesn't forgive easily, even if the object(s) of her scorn may have changed their ways for the better.

Inked version of current design
Add a photo to this gallery
Retrieved from "https://sonicfanon.fandom.com/wiki/Holly_the_Tigress?oldid=1861025"
Community content is available under CC-BY-SA unless otherwise noted.