Start a Wiki
This is an article about Hiro the Hedgehog, a character created by Hiro HedgehogGuy13 on 03/26/2013. 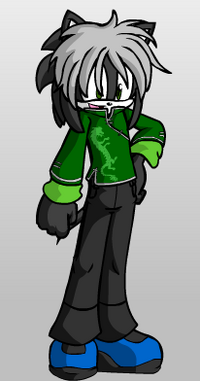 Hiro is a african pygmy hedgehog who is a self-proclaimed knight/warrior and believes he has the skill to accomplish any task.

Hiro is a Charcoal-Black pygmy hedgehog with dark, expressive green eyes. He fashioned his quills to seem like those of Sonic and has two long quills which extend out past his shoulders down to his upper chest. Hiro's muzzle is a brilliant quartz-white and he has a smaller nose; uncommon for a male hedgehog. Hiro also has finely brushed silver hair, which gives off the assumption Hiro's color as a hedgehog is Salt and Pepper. (Image courtesy of HedgehogClub.com), Hiro's tail is also longer than most hedgehog's and Hiro isn't very bothered by it. When enraged, his quills will rise up kind of like a cat's fur. When Hiro is uncomfortable, or embarressed, his ears will twitch a lot.

Hiro sports a green sweatshirt with a picture of a japanese dragon (three claws) printed on it. He wears black slacks and also sports Blue tennis shoes with marks of charcoal-gray.

Hiro, dispite his dark and gloomy looking exterior is actually a pretty nice hedgehog. Usually when meeting a person; Hiro will treat them with respect and commonly will ask to shake hands, fist-pound, hi-five or something else of the sort. Dispite his confident and well-built exterior, Hiro sticks to his beliefs of wrong and right and usually won't be dared told differently. Hiro is also completely sure that he is a knight and even is kind of boastful about it,  (even going as far as saying he could beat a full-suited knight on horseback with his bare hands.) which obviously leads him into conflict with expirenced fighters or warriors. Because of his beliefs of his strength, Hiro has always liked the idea of slaying wild animals; such as bears, for the fun of it.

Something that really bothers Hiro is his height. Hiro is after all; a pygmy hedgehog, meaning that he isn't really that strong, and easily defeated by someone taller than him.

Hiroshi Yukon was born on an unknown date in Turquoise Hill Zone to parents who had not been named, they had brought their son into the world to have joy in their poor lives, but to no avail. They raised Hiroshi in secret, nobody knows why, all they knew is they hid their son away from everyone. Hiroshi spent as much time as he could with his father, even though both his parents were too depressed to even care about his existance.

Soon, Hiroshi grew into a formidable young child, he was a creative and inqusitive soul who had begun to care for the small animals that surrounded his house, as if they were his best friends (and his only friends in this case.) However, Hiroshi's parents grew more and more hateful of Hiroshi, seeing that he was so happy with his life, wanting him to be as miserable as they were.

Before any physical damage could be done from his parents to him, Hiroshi was sent away from his home by boat to a remote island many miles due west of South Island. Hiroshi was eventually raised by a young female knight, whom of which was a friend of Hiro's actual parents. The knight taught Hiroshi how to read and write; after a while, he adopted a new nickname "Hiro" that his stepmother called him most of the time. The Knight also told him stories of the many battles she had fought and how even in the most bleak of situations, she pulled through and became respected among her people. After hearing the excitement and happiness being a knight brought his new mother; Hiro wanted to be a knight.

When his Stepmother heard Hiro say the words, she simply chuckled and told him of how dangerous being a knight could be. Especially for someone of his size and strength. Hiro barely cared and said he still wanted to be a knight, seeing how happy it was, and began to "swordfight" with sticks from an apple tree outside his house.

Everything went smoothly... that is until Hiro's Stepmother said she had to go fight in a war. Hiro burst with hapiness, saying that he would be happy to go with. Hiro's Stepmother just shook her head and said that Hiro would be left to the neighbors.

Like his Stepmother said, war broke out in the village; all day the bloodcurdling screams of men, women, children and animals filled the air; what were once pastures of tall grass became graveyards, the plantlife; matted with blood, the weapons and sheilds of fallen soldiers and soldiers themselves. Peasants and the families of knights watched in horror from their windows, desprately trying to make sure that their loved ones stood to fight another hour. Hiro stood most horrified, gazing from windows in a home which belonged to someone he didn't know.

Much to everyone's glee; the war didn't last long; only a few days. The knights had frightened off the attackers. The Knights who survived had all returned home... unfortunately for Hiro, his mother had not. He waited for hours at the door each day, hoping to see even a trace of her, his awnser finally came when he had returned home already to the empty house, a nurse from the war knocked on his door. Much to his dismay, the nurse was apologizing for Hiro's loss.

Hiro was sent into spiralling depression, he remained inconsolable; walking around what was the battlefield each day. Hiro wouldn't talk, he wouldn't eat he wouldn't sleep... he felt more alone than ever. He started to think about his past life; how he was ignored by his real parents, and how the best thing that ever happened to him was now murdered in pure nationalism for another land. All the more he thought about it, the smaller he felt... what right did he have? He was only a short hedgehog, quite possibly the shortest out there.

Then, a few days later; he got an idea while sitting on a fallen tree. "That's it!" he thought. He would become a knight in his mother's memory! So Hiro decided to take up his role as a page and trained under a different knight. In the many years that followed, Hiro became more confident in becoming a knight to the point of where he was in the midst of his training, his mentor had decided to stop Hiro's training early because he had become so confident (that and the fact Hiro's mentor thought he wouldn't be useful because of his sheer small size.)

Hiro was finally challenged by a young knight who thought Hiro had grown too big for his britches. Suprisingly, since Hiro was raised by two mentors, Hiro fought well, showing signs of moderate swordsmanship and unique techniques taught to him by his stepmother. In the end, Hiro won the battle after his opponent had begged for mercy.

Ever since, Hiro began looking for new challengers, sharpening his skills each and every day.

Hiro's sword is a basic steel broadsword, colored yellow to resemble gold. The sword is valued by Hiro and said to be kind of like a sucurity blanket to him at times.

Hiro can swordfight suprisingly well for his size, showing no signs of mercy until the very last second when he senses his opponent won't take much more. Contrary to the beliefs of many (including his mentor) Hiro's size actually has more benefits than weaknesses, it makes him much more agile and quicker which means he can deal strong blows with his sword at a daunting pace.

While Hiro isn't the best fighter; he can defeat your average run-of-the-mill mobian pretty easily in a fistfight. Hiro prefers to throw weak punches at a quick pace (an ability nicknamed by him as "Speedstriking"). However his small size and light weight make him vunerable to strong blows; making him defeated easily by someone like Knuckles the Echidna.

Hiro's weaknesses mainly lie in his personality. Hiro is easily manipulated because of his usual respectful nature, and whenever he gets manipulated and he doesn't know it; he commonly gets angered REALLY badly by this. Another weakness Hiro sports is his small size; while it is beneficial to him in many ways, there is the already mentioned downfall of his light weight and small body, and when Hiro is taunted about his small size; he gets fired up.

Making Hiro angry will commonly make him clueless to anything else; which can allow a cunning villian to take him down fast.

Retrieved from "https://sonicfanon.fandom.com/wiki/Hiro_the_Hedgehog?oldid=1357289"
Community content is available under CC-BY-SA unless otherwise noted.