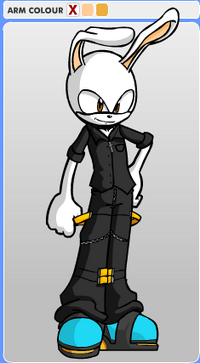 Hip the Hopper, also known as Jack Spiecher, is a young, male rabbit and the leader of Team Blackout. Despite not being able to technically fly, Hip is the flight member of the team. Hip the Hopper was the first OC created by FierceFlame9001, for Untitled.

Jack the Rabbit was born to Mack the Rabbit and Angel the Rabbit in a small cottage located in Pann. Soon after he was born, the Infinity Emeralds were discovered underneath the home and they were attacked by Rex the Dragon. Before they died, Mack and Angel sent their children, including Jack, to the human world, Earth. Jack arrived safely and was soon discovered by renowned german Professor, Fredrick Spiecher and his daughter, who had also been born that night, Alice Spiecher. Nicknaming him Hip the Hopper, Fredrick took Jack in and raised him as his own.

21 years later Mobian research and response group D.R.U.G. discovered Hip's wherabouts. They dispatched soldiers who killed Fredrick and Alice and captured Hip, putting him in a cyro-storage tank to keep him alive for research. D.R.U.G used that research to develop several weapons that were very effective in killing Mobians, should they become a threat.

80 years later Hip was discovered when Team Blackout raided the base in an attept to sabotage the weaponry. They took him back to their headquarters and resuscitated him. After recovering from the shock of being in the future and learning that Rex was still alive, Hip joined Team Blackout to extract revenge.

Due to his losses and lack of social interaction throughout his early life, Hip is very quiet and anti-social. He doesn't speak unless spoken to, normally spending his down time alone, reading books from his time. He also gives very short and direct answers when questioned and dsilikes extended social interaction with people because it leaves him with feelings of awkwardness.

Jumping - Due to his rabbit heritage, Hip is able to jump almost 100 feet in the air, higher than mosty other characters in Untitled.

Intelligence - Hip has recieved 14 years of tutoring from Fredrick Spiecher, a very renowned professor, in subjects such as biology, math and history.

Language - Hip, like all mobians, is able to talk to earth animals. Hip is also fluent in both German and English.

When Exposed to the Blue Emerald of the Infinity Emeralds, Hip fuses with Memorius, the spirit of the blue emerald, and becomes Jack of Memories. Originally, Memorius controlled everything Hip did while in this form, but after befriending the spirit and much practice, Hip was able to control himself as well.

While in this form, Jack has access to numerous abilities, such as erasing memories, creating false memories, mind reading, time travel and inducing sleep.

Retrieved from "https://sonicfanon.fandom.com/wiki/Hip_the_Hopper?oldid=1472372"
Community content is available under CC-BY-SA unless otherwise noted.