I havent been with man in twelve years, and now Im old and unattractive.

Hikari Zephra (born Umiko Aoi) is a 64 year old (looks 30) anthropomorphic neko-mata and 100% angel. She is the mother of Fuchsia, Koya and Blaze.

When Hikari (know as Umiko Aoi at the time) was thirteen years old, she was called to earth to attend the Golden School and become a 100% guardian angel. She was assigned to watch over Maria Robotnik, as was a young devil student named Kagemi Akai. Arkhan gave her a chaos emerald and told her to go into space and board the ARK. While watching over Maria with Kagemi, she began to find her self gradually becoming more attracted to her devil rival. One day, Kagemi underwent henshin so they could kiss, but Umiko refused, he tried to convince her, but she was afraid that they would be discovered. They decide to kiss anyway, but as they are abut to kiss, Kagemi was discovered by Gerald Robotnik since he was in henshin form. He was quickly captured and experimented on, this led to him forgetting all about his mission and Umiko. He had now gone by a new identity, and he began to fall for Maria. Umiko Eventually won the challenge and and became a 100% guardian angel, yet she was still heart broken, she missed Kagemi. But seeing that he had lost his memory of her, she felt that she could not go on, so she attempted suicide by taking a special poison that she thought would kill her, but instead sent her into a suspended hibernation and slowed her aging as if she were frozen in time. 22 years later, she awoke from her hibernation with her body aged only 10 years. She wandered around hopelessly until she met a young prince named Tsubasa, he offered to take care of her, she thought she was replenished, that she had found love again, so the got married, became the king and queen of Hitama kingdom, and had a beautiful young daughter named Blaze. However, Hikari had always kept a secret from Tsubasa, that she was an angel, this made Tsubasa suspicious and led to him constantly accusing her of sleeping with other men, she told him she wasn't, so he kept a close eye on her. They had very bad trust issues and thus began to fight and argue, and it only got worse as time went on. Whenever he thought she was lying to him, he would beat and abuse her, on some occasions, he would even cut her. Two years later, When Hikari gave birth to Fuchsia, Tsubasa denied that she was his child, so he demanded that she be given away, when she refused, he attacked her. He then decided to divorce her and she changed her name to Hikari Zephra, and left the kingdom with the newborn Fuchsia.

Hikari rarely uses her powers anymore, as they just remind her of her dark past.

Hikari is very sensitive and insecure. She has barely any self-confidence or self-esteem, so much that she refuses to use her powers any more because she says that they only remind her of her pain and suffering. She has even been known (though very rarely) to inflict harm on herself by cutting, scratching, or burning her self.

Hikari is very kind and caring. She is your average single mother who loves cooking cleaning and taking care of her children. To support her family, she works as a housekeeper during the day, and as a traditional dancer in the evenings. Despite her caring attitude, she has developed a grudge against humans ever since the incident fifty years ago, because of this, she is often very depressed and lonesome. She is also very insecure and sensitive. She is very self conscious about her aging, she fears that her aging is catching up to her, but she doesn't realize that she has stopped ageing. Like her daughter Fuchsia, she cannot control her emotions, but she does not go crazy like Fuchsia does, instead, she will grab the person that is making her mad, and start spanking them as if they were a disobedient child. She is very lonely and desperate, however, despite being very beautiful in appearance, she often looks at herself as old and unattractive, so she thinks she will never find love again.

"Don't talk to an adult like that, young man/lady!"

"Its been fifty years since a man has loved me, now I am old and unattractive."

"Your an old, ugly hag!" -Looking at herself in the mirror while crying.

"If I was truly as beautiful as you say, I wouldn't still be raising three children by myself."

"I love my children more than anything in the world, but I would give anything to find true love again."

Hikari at age 14 (known as Umiko Aoi at the time) 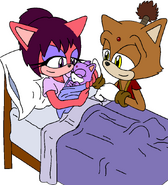 Hikari holding Blaze and lying next to her husband, Tsubasa

By User:Aly Paris
Add a photo to this gallery
Retrieved from "https://sonicfanon.fandom.com/wiki/Hikari_Zephra?oldid=1853276"
Community content is available under CC-BY-SA unless otherwise noted.