View source
This is an article about Hideo the Trickster, a character created by Jaredthefox92 on 12/21/2012. 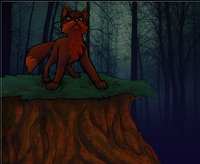 "Cheerful hedgehog, lively hedgehog. What brings you to Hideo's woods?"~Hideo trying to greet Iceheart, as well as point out Iceheart's personal character flaw.

On the outside Hideo appearce to be a normal fox, but with orange and black fur. Looks are always deciveing when Hideo is involved however, as he is a powerful and cunning demon spirit. Hideo is also known to have the power to change his appearance, much like Kitsune dieties of old Japanese legend.

Hideo is very mischives and anti-social, mostly being a fox for about a eternity all his life. He loves to play tricks on people who enter his woods. He usually will play more sever tricks and schemes against thoase who he sees as arrogant and prideful. Hideo has been known to scare off people out of his woods, but this might be because he is fiercely protective of his woods. Despite the fact Hideo has multiple types of powers and abilities, he seems to mostly use his powers to trick his foe instead of destroying them outright.

Hideo first came into conception when I his creator had to make a drama class project based of the "Three little pigs," and have the theme of a type of threatre type. His creator decided to use classic Kabuki style and with his three other partners he would play out a play based on that theme. His creator decided a wolf eating the poor and innocent pigs was to bland of a story so the pigs where to be powerful and vile land owners who conned and oppressed their servents. Hideo was created to be a replacement to the wolf and to be a seemingly weak fox who actually was a diabilical trickster villain. Since then Hideo has appeared in several roleplays and has made frequent cameos in cetain Sonic fanon storylines. He is considered to be a frieng arc story character and or reaoccuring supporting villain.  Hideo has also become a villain who has fought Deraj, Jared the fox, and Iceheart the hedgehog in a battle of wits before.

Hideo's powers stim from anchient Japanese legened, as well as a few odd powers. Hideo gets the classic power to shape shift, (even into a female which suits the classic Japanese Trickser role.) He also is known to be able to teleport, create illusions, cloak into the local scenery and create certain objects out of thin air.

Hideo also retains standard fox abilities like being able to smell and hear well. He also is good at fishing. What makes him such a scary foe is his cunning intelect, and his ability to manipulate other people and creatures.

His skills are as follows: Fishing, scaring people off, decieving people, lying, stealth, hiding, planning things out, ridles, and finding out others fear's

Hideo rarely attacks unless for finish off an oppoent, (as he did Yoku the greedy pig in "The Three Arrogant Pigs ans the Kitsune", by pushing him off the well Yoku was standing on while searching for gold.) His mind tricks can be negated by intellegent, wise, or psychic individuals. Also Hideo focuses too much on illusions so most of his attacks is caused by his opponent panicking to death or dying in real time while being decieved by an illusion.