Voted Best Villain Runner-up for Winter 2015!
This is an article about Hersephenes, a character created by Frozen Scorpio on 08/1/2014. 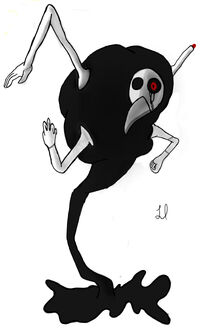 There once was a crow named Jeremiah Mann. He was a very wealthy man, and was bitter at the world, believing everyone else were moochers who only wanted his money. He kept this sense of paranoia throughout his life, until one day, he had crossed paths with a woman offering wishes, and as a joke, wished for immortality. At first, he had doubted her, and after returning home, accidentaly caused a knife to slice through the top of his head. After seeing that he did not die, despite the tool having cut through his brain, Jeremiah was ecstatic, now believing that nothing could kill him.

His lifestyles had taken a dangerous turn for the worse. Constantly drinking and getting into fights, all of which he had won due to his physical immortality, until one night, where he was walking towards home, immensely drunk. He began to wander in the middle of the street, and had caused a car to crash not only into him, but also into a truck carrying a large amount of oil. The crash and subsequent explosion afterward had completely obliterated his body, with not a single trace left. The oil eventually leaked into the sewers, and began to form into a bird-like form, with a serpentine lower-half. The next morning, it was revealed that Jeremiah's soul had fused into the oil, as it had no body to return to. Jeremiah waited until the next night, moping in his new monstrous form.

When the time had come, he had left the sewers, seeking out the person who had donned this terrible curse on him. He eventually had found her, demanding she fix him. As was the obvious response, the woman was terrified of this being, and refused to help him in any way, locking herself in her closet in hopes that he would go away. Jeremiah had grown extremely impatient of her, and found that he was capable of changing his shape/form. He basically melted himself, and seeped underneath the door and puddled around the woman, who was paralyzed with fear. He had began to reform around her, essentially absorbing her into himself. Afterwards, Jeremiah had compressed his body, causing the wish-granter to burst underneath the pressure, leaving chunks of her flesh, a huge pool of blood, and her soul fused into one of her eyes. He saw this, and swallowed the eye, thus stealing her soul and obtaining her wish-powers.

After consuming her soul, Jeremiah had began to grow a hunger for others souls, so he had begun killing poor and/or homeless people to consume theirs, as they were easy targets for his hunt. After some time, he had grown bored of this, now seeking out more challening prey. Due to his past greed, he had become drawn to others who were either rich or greedy, consuming them more often than ordinary people. From consuming the souls of so many people, Jeremiah had forgotten who he once was and what little he had stood for, now calling himself "Hersephenes."

As time had gone by, Hersephenes had slowly begun to become more intelligent, and began to follow the patht that the wish-granter had gone, though instead of money, he would take their soul energy, and also twist the wish so that it ends with the wish-maker in misery, where Hersephenes would then come in and eat the rest of their soul, as a troubled/sad soul has more flavor to him. Not only that, but as he had continued to do this, he gained a sick pleasure off of other people's depression.

At present day, Hersephenes is still alive and well. With all of the souls he had consumed, his form, powers and mind have improved vastly.

Events of The EQuartz Committee (Season 1)

To be edited later.

Hersephenes, being made of a liquid, can change his shape at will, allowing him to easily sneak through small spaces and even combine with other liquids to increase his size. As previously stated, he also has wish-granting powers given to him by killing a woman with that ability, as she herself was cursed to pass it down to whomever succeeds her. He can also break down fragments of himself to either create obstructions, form smaller entities to spy on others, or to seep into a deceased body and essentially re-animate it, now under his control. Hersephenes can also change what state of matter the assimilated oil is in, allowing to form blockades/generate sharp pillars of solidified oil (solid,) alter his physical form in ways that would be impossible for a solid being (liquid,) and converting it into a gaseous state in order to simulate poison attacks (gas.)

Hersephenes' signature ability is that he always seems to catch his prey, whom are always greedy souls who carry great value for personal possessions. This is because he can actually see into other people's souls and sense how they truly feel inside, and can gain more power and fuel for his own soul based on what weighs their conscience down. Those who are miserable, overly greedy, or have past troubles in the backs of their minds are easily targeted as prey, as they are plentiful and provide ample energy to both strengthen Hersephenes and keep him alive.

Aside from those, Hersephenes still has a few tricks left within him. He can manipulate the bones contained within him to form elongated arms, tentacles, and other such things for extended range. If there is so much as a small drop of oil nearby, Hersephenes can use it in ways similar to that which makes up his own body, but would require much higher amounts of energy to maintain this form.

Hersephenes is a very cruel person in concept. Using his wish-powers to bring misery to people then killing them afterwards can be considered cold-hearted by a great many. He is also quite manipulative, often using other people to achieve things he normally cannot, then immediatly getting rid of them when no longer needed. Hersephenes usually hides in the shadows, tempting those who stand in the light into straying from their paths without them being frightened by his appearance. Even so much as attempting to trick him shall invoke his wrath, which if it wasn't clear enough, it something to avoid.

Being made of oil, Hersephenes has a natural weakness to immense heat, as it would cause him to combust and eventually burn out, leaving his soul to search for more oil to replace it. On top of that, his liquid form can be frozen solid and rendered immobile, with his soul trapped inside. As his body and soul have decayed from an uncountable amount of years of continued existence, Hersephenes must constantly refuel himself with the souls of others, or else his souls "flame" will go out, reducing him to a mere puddle of oil and bone, and quickly fade to dust.

Hersephenes, in his normal form, currently resembles an amorphous black demon with a larger upper-area and a drastically smaller lower-half. His left eye-hole is completely vacant while the right holds a small red gem that functions as his eye. Hersephenes has four arms of varying size and origin, all drained pale white and stitched up, one of which not even having a hand but instead a red mechanical nub that can give off radio signals. It's entire body is constructed of oil, and on occasion, one can see bones through the flowing oil. Underneath the mask is a large skull and a detached jaw, with no signs of skin or flesh on either.

By using pieces of those he's consumed, Hersephenes can easily take on any appearance as long as it is equal size or smaller than him. He can also copy the voice of the one whose form he takes, but he cannot become a complete copy. Unless paint or other forms of applyable colors are avaiable, Hersephenes will still retain the same black coloring associated with oil, and, whether painted or not, is still weak to fire. Usually, when doing this, Hersephenes dresses in clothing that generally covers or blends in more skin to hide the imperfections of his disguises.

Hersephenes as Krampus from the Binding of Isaac (Christmas 2014)

Hersepehens 2015 (IN COLOR!!)
Add a photo to this gallery

Retrieved from "https://sonicfanon.fandom.com/wiki/Hersephenes?oldid=1658924"
Community content is available under CC-BY-SA unless otherwise noted.