Start a Wiki
This is an article about Helga the Jotunn, a character created by Jaredthefox92 on 05/17/2015. 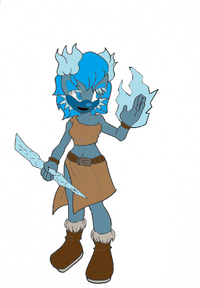 Helga is believed to be the last surviving Ice Jotunn in Northern Eurish. She is uncharacteristically a kind and gentle frost giant(ess) who is mindful of her people's past transgression against the mortals, thus she seeks to set a good example. She is a mighty warrior gifted with powers and abilities associated with her mythological species. However Helga uses these gifts to try to do good for others and is known to be quite motherly actually.

Helga is a Jotunn, meaning she is naturally a giant(ess). Her height is estimated to be around 100ft(30,5m). Being a Jotunn Helga's skin is naturally dark blue. Her eye lids are covered in frost like eye lashes and she has light blue hair.

She wears self made garments of what appear to be a brown furred top to cover her chest and a brown loin cloth to cover her underbelly. She wears hide made boots that allow her to traverse through snow easily. For decorative purposes she wears two bracelets made out of human shields upon both of her wrists.

Against the character of the Jotunn archetype Helga actually is a kind and compassionate being. She respects all life and nature as well. Helga seems to also posses a maternal like aspect to her character and loves to be around younger travelers when she comes into contact with them. While Helga is a natural, er um-natural born fighter and warrior she believes in mercy and would rather make friends than enemies.  However her ferocity in battle cannot simply be underestimated as well.

Being a Jotunn Helga posses some mystical abilities as well. Her main one is the ability to control ice and freeze objects thus making her a de facto cryokinetic. She is able to freeze a human with a simple touch, (not that she does that to them anymore) , or unleash a devastating beam that can easily freeze her opponents. She is also known to be able to conjure up ice elemental armor and weaponry if needed as well.

Finally Helga possesses basic immortality thus allowing her to stay young far after the time of the Nordic people have passed.

Helga naturally possesses all the strength and might of a Jotunn frost giant(ess). At her size normal beings and even Mobians appear to be that of mere toys to her. This is evident in how she can use her pure strength to toss around and even crush her opponents simply by her own might. She is also inhumanly durable and can take several types of small kinetic or concussive attacks before succumbing in battle.

She is also quite the craftswoman and thus able to create her own clothing, tools, and equipment with the proper resources.

Helga over the course of her many years has learned to be self-reliant thus allowing her to survive while separated from her clan. She is quite capable of hunting and cooking for herself, as well as making her own items and tools. She is known to to be an expert hunter and food gather, as well as builder that she made her own little camp within the frozen wilderness.

Helga has family bloodlines dating all the way back before Ragnarok, (otherwise known by Mobians as the Precurser Mobian War and by humans as World War Three ) While she wasn't born yet her Jotnar decedents hid in seculsion from humanity until they fought in the final battle of the gods previous lifes. Eventually as the first Mobian civilizations came about and as the very gods themselves were rencarnated into Mobians so too did the Jotnar.Helga was born a half-Mobian/half-demigoddess, (Note: The Jotnar are demi-gods in their own right in Norse Mythology, and sometimes even more powerful than the gods themselves.)

Retrieved from "https://sonicfanon.fandom.com/wiki/Helga_the_Jotunn?oldid=1798752"
Community content is available under CC-BY-SA unless otherwise noted.