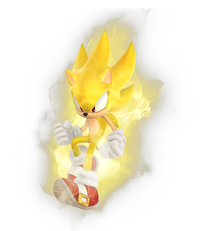 Lightning Dude and Eggman had made Hedgehog Dude fall in a volcano. Hedgehog Dude tried to hold on but fell to his doom. However, he didn't die because he was able to access his super form. He then battled Eggman and won in such a short second.

Hedgehog Dude's skills are also supernatural. He had been born with is trademark speed, powers, speed powers, and skills

His super form is not known to have any weaknessess. He has mastered the elements. He is stronger in this form.

Retrieved from "https://sonicfanon.fandom.com/wiki/Hedgehog_Dude%27s_Super_Form?oldid=1391171"
Community content is available under CC-BY-SA unless otherwise noted.