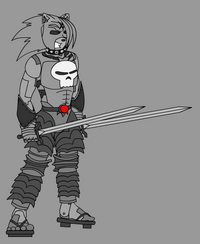 H.E.D.G.E.D.R.O.I.D 19-87 is a Super Robotic Hedgehog created by Dr. Eggplankton. His mission is to search and to destroy Jack the Hedgehog under his master command.

He is played by The Hooded Anarchy and the first enemy Jack faces in Jack Boom.

He's fur alot sharper then most normal hedgehog. He also wearing bionic samurai pants along with a Skull Symbol on his chest.

He also hold robotic weapons from whoever he copy. (Ex: Stocking the Hedgehog dual swords). Thou he only use the weapon against who originally using that kind of weapon.

Like some villains, He is willing to stop at nothing till his mission is either complete or called off. He is determined to complete his mission without failure.

He is also mostly blood-thirsty, willing to kill anything in it path to active his goal, Making him the most deadly member in Dr. Eggplankton Army.

After he was made, He use a Galaxy Scan to scan the entire universe to copy any hedgehog abilities(Including Jack the Hedgehog and Stocking the Hedgehog). He later used those moves against the hedgehog he copied.

This include using their weapons against them as well.

He hold Hedgehog Speed, Much like Metal Sonic. He can also sense when other Hedgehogs are near by and strike before the heroes can do a sneak attack.

Retrieved from "https://sonicfanon.fandom.com/wiki/Hedgedroid_19-87?oldid=1546796"
Community content is available under CC-BY-SA unless otherwise noted.