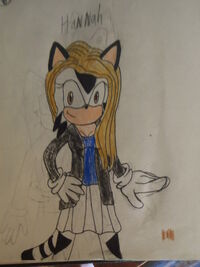 Hannah has purple eyes and blonde hair, which is very wispy. She has slight dimples when she smiles. She has black stripes all over her body even on her face.

Hannah loves to flirt, mostly with Pippin after she met him. She tries her best not to seem like she doesn't care about others but some times finds her self doing just so. This gets her down. Pippin Always cheers her up with a few wisecracks and pranks.

Hannah mostly had a normal life.... until she was thrown off a building by Doctor Eggman! Luckily Pippin saved her. His Spider-hog mask had been torn so Hannah saw his face. Later she swore to never tell another person. Afterwards Pippin asked her out and they began dating.

Hannah is not the fastest cat on the block, but she's fast! Her favorite past time is seeing if she can keep up with Sonic. Or chasing Pippin while he swings though station square

Hannah is a skilled acrobat as well as a runner. She loves leaping and spinning though the air.

Hannah's greatest weaknesses is falling. Lucky for her Pippin is around to catch her when she falls. She is a normal tiger so most things can hurt her easily. If they can get her to slow down!

Add a photo to this gallery
Retrieved from "https://sonicfanon.fandom.com/wiki/Hannah_The_Tiger?oldid=1798401"
Community content is available under CC-BY-SA unless otherwise noted.