He likes sticking up for his friends. (Unfortunately, he is on the danger of Dr. Eggman...). Also he loved interested to Kudana the Cat.

Hangku was born on June 19, 1986 in Manhattan, New York City. When he was a young hedgehog, he saw the Twin Towers and the World Trade Center with his mother and father in 1992. On September 11, 2001, he saw the American Airlines Flight 11 hit North Tower for first time, watching as the tower set ablaze as countless people died in the attack. He was horrified of the sight that such people would do. On March 11, 2011, they saw news of Japan hit by earthquakes and tsunamis at Fukushima, which then later made the nuclear accident. He was afraid at first of what most disasters were capable of, but then, he realized what he can do. So now, he battles villains and tries his best to fix problems around the world.

When his friends were captured by the malevolent Dr. Eggman, Hangku came to their rescue. Though will he was making his way to his friends, he was encountered by Eggman's robots, which he destroyed real quickly with the help of his KN-44. After that, he then encountered Eggman, who he also defeated easily. He then rescued his friends from their cells and escaped with them. After that day, Dr. Eggman considered him one of his "enemies"...

"Good job, Sonic Team, get ready for next round!" - Round win

"We lost the battle but the war goes on. Bring it!!" - Round lost

"The bomb has been planted." - 45 seconds to explosion

"Victory is all mine, let's get out here and go home." - Victory posted

When he gets hit by an enemy bullet, he feels wounded and unconscious. 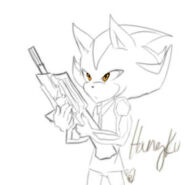 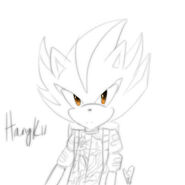 Start a Discussion Discussions about Hangku The Hedgehog