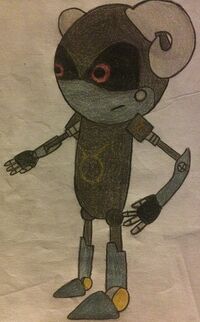 Gyro was originally created by EQuartz Industries for use in combat for later on in time. His creators had focused on brutal physical strength for more close-ranged combat, as most of their army machines were higher focused on ranged attacks rather than up close. Immediatly after being finished, Gyro was, instead of put in storage, activated and programmed to have somewhat of a cold personality, caring not for those lesser than him.

Many months passed, each day the same as the last. Either go out and destroy whatever is protecting an area, or just stay and do nothing. That is, until one day, where he was tasked with introducing a new person by the name of Twitch into EQuartz, having been told of her great physical prowess. At first glance, he had believed they were mistaken, as she did not look nor act the part that he expected, and during her introduction mission, he had constantly tried to discourage her so that she would leave, believing she would only be a detriment to EQuartz true goals.

During said mission, a cave-in had occured, and Gyro attempted to open a path by throwing the fallen boulders out of the way, with no care as to where he threw them. This caused a large gem to fall from the roof of the cavern. He was unaware of this, having been destracted by his doubt to notice, until Twitch jumped in the way and destroyed it with her vibrations. It was then that Gyro had discarded his doubt of her, and interest in her had begun to grow inside of him.

He asked her to meet up with her later, and during that meeting, he had asked if she could be his friend. Gyro was very unsure of how she would respond to his request. He himself was somewhat shocked when she replied with "yes." From then on, they were the best of friends, with Gyro helping her whenever need be, and Twitch teaching him about the outside world, as he is only ever sent out for collecting artifacts.

To most, Gyro is very cold, not really caring for what happens to those lesser than him. Only with true respect to someone will he actually care for that person. Twitch was the first one to gain this sense of respect from him. He always tries to assure himself that he is the strongest non-organic alive, which by EQuartz standards, is true, though he occasionally has doubts of this position whenever anybody seems to perform even a little bit better than him in any given topic, as he seems to suffer from minor issues with his pride.

Gyro's abilities lie heavily in his physical strength. A punch from him at maximum power can shatter solid diamond if done right. Though his greatest strength is also his biggest weakness. Due to this, he cannot use weapons properly, as they all quickly break in his hands, and as such, he has little-to-no long range capabilities, making him an easy target if far enough away. As a side note, Gyro has a powerful gyroscope within him that allows him to always land on his feet, even in impossible situations, and, with a few modifications, Gyro is also capable of turning himself into a chainsaw, though it's been shown that Twitch is the only one to properly weild him in this state.

Basic Design
Add a photo to this gallery

Retrieved from "https://sonicfanon.fandom.com/wiki/Gyro_the_Mechanical_Ram?oldid=1661009"
Community content is available under CC-BY-SA unless otherwise noted.