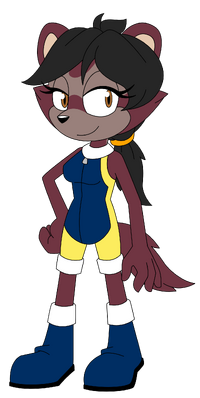 Gwendolyn Grison is a member of the Red Valley Freedom Fighters.

A somewhat curvy grison who stands a little over three feet tall, Gwendolyn has a short muzzle with a triangular nose, small, rounded ears, and a fairly fluffy, medium-length tail.

Her fur is primarily catawba in color, with a broad, cinereous horizontal stripe that reaches from her forehead to the back of her neck, as well as a cinereous muzzle, chest, and stomach. Her hair, which is fairly long and tied back in a loose ponytail, is black in color, and her eyes are copper in color.

Her outfit consists of a cool black and corn sleeveless zip-up bodysuit with short leggings and white neck/leg cuffs, and cool black boots with white cuffs.

A fairly strong and durable fighter, Gwendolyn is skilled at hand-to-hand combat, and can hit quite hard, staggering lightweight foes with strong strikes. Being a grison, she has sharp teeth and claws, and wields these in a fight to great effect.

Gwendolyn has no specific resistances to any Elements or energy-types. She is quite durable, and can weather minor blows with ease, making her a deceptively resilient fighter.

Gwendolyn has no specific weaknesses to any Elements or energy-types. Her speed and agility also aren't anything special, and faster foes can outpace her. She can also still be worn down over time, despite her respectable durability.

Typically cool and collected, Gwendolyn is known for having an easy-going disposition, while being fairly prone to sarcasm. She's slow to anger, and is generally the one to calm down Holly whenever the tigress happens to become agitated.

Drawn by XophPsycho (Talk)
Add a photo to this gallery
Retrieved from "https://sonicfanon.fandom.com/wiki/Gwendolyn_Grison?oldid=1860858"
Community content is available under CC-BY-SA unless otherwise noted.