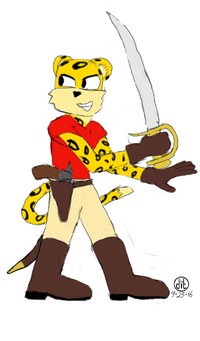 Gules is a lean, yellow-orange Mobian jaguar with a tan muzzle. His customary attire consists of a red shirt based on a medieval tunic, khaki pants circumscribed by a brown belt, and long brown boots and gloves. He keeps a revolver holstered on his right hip, and his saber sheathed on his left.

Most of the time, the quixotic Gules is a cheerful, energetic, and excitable chap, with no angst to speak of. An unapologetic romantic, when duty calls—or he thinks duty is calling—he goes rather circular in the head, obsessed with chivalry, courage, justice, and honor. In general, he is largely self-absorbed and is unable to grasp how his quirks affect others. He also finds pain stimulating—enjoyable, even.

Through long practice, he has acquired considerable skill in melee combat, particularly with the sword. He fancies himself a good shot with a handgun, but has in truth never hit a target outside of a gun range. And however ridiculous he sounds when being one, he is a good motivational speaker.

Gules is not the sharpest tool in the shed, and often thinks his opponents have the same standards of honor that he does. He has no concept of subtlety and barges blindly into situatiins unless restrained by comrades. Further, he doesn't understand that retreating is, if not more honorable, certainly a more intelligent option at times.

Gules' weapon of choice is a rather nondescript saber with a bronze hilt. Its origin is known only to him, but prevalent public theory is that he found it at a garage sale for a dime. Knowing that most criminals carry firearms if they're armed at all, he keeps an old revolver close at hand just in case.

Gules is uncharacteristically quiet about his backstory. As Azure the Hawk says, "do we really want to know why he's nuts?"

The Order of Annulus

An already infamous young man around Annulus Island for his well-intentioned interference in the apprehension of criminals, Timothy was invited by Or the Fox to help establish his vigilante team, The Order of Annulus. This was when he took on the moniker Gules. Under the leadership of Or and the gentle persistence of Azure, Gules became less of a loose cannon and grew into an efficient crime-fighting machine. The Order worked together with almost perfect success for three-plus years.

Precisely forty months after the founding of the Order, Or arranged to meet with Gules and Azure. At this meeting, he revealed his true intentions for founding the team. He had been weakening the area crime lords in order to establish his own rule of the Annulus underworld. He had hoped to gain their trust over the last third of a decade so that they would be willing to be his enforcers in this endeavor.

However, as he had feared, Gules and Azure were shocked and angered at this deception. Gules nearly destroyed the fox on the spot, but was restrained by Azure. Depending on your perpective, either Or was dismissed from the Order, or the other two were. Both ends of the split considered themselves the true Order of Annulus, though Gules and Azure would often refer to themselves as Team Annulus to be more casual.

Determined to restore honor to the Order, Gules gladly agreed with Azure to continue the work, but fully in the name of peace and the law.

Retrieved from "https://sonicfanon.fandom.com/wiki/Gules_the_Jaguar?oldid=1840290"
Community content is available under CC-BY-SA unless otherwise noted.