Start a Wiki
This is an article about Gris "Hypon" Shirona, a character created by HyponX on 04/10/2013. 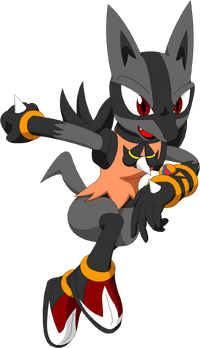 'Hypon' is a fictional character, Half Pokemon, Half Mobian with a crescent symbol on his chest created by LucarioShirona from Deviantart. He is one of the last few members of the Dialgian tribe and gaurdian of The Stone of Dialga.

His real name is Gris Bradley, while his nickname 'Hypon' was given by his friend Aqua the Vaporeon. He later had his last name changed to 'Shirona' some time after meeting the Sinnoh Champion, Cynthia. Hypon is actrally a combination of Hyper and Sonic, named after his creator.

Hypon only game appearance was Mugen as DLC, possibly based on a Street Fighters movesets. The DLC was created by Spikehedgelion8. However in Super Smash Bros. for Wii U and 3DS, a Grey colour swap for Lucario closely resembles Hypon.

During 2009, Hyper-sonicX created a OC to represent as the owner for custom sprite sheet. At the time, Hypon was only by his creator's username and filled no other perpose than just to be a random character at the bottom of each sprite sheets created by the user.

This design was noted as Classic Hypon, but also at the time being called Hyper. The sword that he hold soppose to represent the users intrest in the Japanese Anime 'Bleach', but was removed later.

Hypon is tough, gullible and a short temper, his anger sometimes lead him into trouble where he least expected. Hypon has strong determination on achiving his goals, one of them is training to control his Aura. He has a strong sence of tracking time, but when he is focused on a few things, he completely looses his sence in time.

Hypon can be abit of a loner at times, let alone trying to handle any situation on his own, but he does whatever he can to help others in need. He also has a habit of scratching his head when ever he's confused or thinking.

Though his time with Cynthia, Hypon has learn to loosen up but also picked up the Champion's bad sense of humor. He's also goes protective of Cynthia when being around another male her age.

Hypon was born at Chun-nan and his mother left him and his father behind (for certains reason which can't be explained at this time). Being one of the last few members of his tribe the Dialgians, his father gave his son the duties to protect the tribe's presious and most powerful treasure, the Stone of Dialga. He learned alot from his father and his culture, one of his father's teachings is about Dialga looking after Hypon when ever his father is not around. At the age of 10, his father died due to an illness which led to Hypon despair of the lost of his father. It was later that he suddenly was able to summon Dialga right before him and remind him of his father's word.

When Hypon became 14 he trained self defence and became focused. At the very same time,  Hypon notice a storm blewing in and left right after. Without notice Hypon saw Aqua the Vaporeon washed up nears a body of water and treated her. The two became friends weeks after they met and two years after, he and Aqua left Chun-nan for advanture.

Two years after, Hypon was attacked by a Mysterious Man with Blue Hair and stole away the Stone of Dialga, thos dumping the guardian into the Pokemon Dimension where the distortion of Time and Space transformed him into a Riolu. It was later than that he was found in a coma outside of Celestic Town by Cynthia the Sinnoh Champion.

Hypon has the ability to control time and warp through dimensions thanks to the Stone of Dialga, the stone however can also power his Aura (which exist in every single living creature) and control it for close hand-to-hand combat. Hypon can also do some attacks such as Aura Sphere and Force Palm. He can also channel the Aura energy to his eyes which allows him to see objects and other physical stuff around him just by having his eyes close, he can also see objects go in slow motion which allows him to evade easily, Hypon calls it 'Vision of Aura'.

Hypon has the ability of transformation, one of them being Mega Evolution which requires the use of a Lucarionite, a Key Stone and a strong bond with Cynthia. Sadly he has yet to control his Mega Form. Another transformation comes from an alternate dimension where he turns into a female Zoroark when hit by cold water, and turned back to normal by hot water.

Hypon has a habit in starting an arguement, this leads him into trouble sometimes. And it's worth noting that he gets nervous around flirtatious females. Hypon has also have a great fear of thunderstorms.

Retrieved from "https://sonicfanon.fandom.com/wiki/Gris_%22Hypon%22_Bradley?oldid=1741591"
Community content is available under CC-BY-SA unless otherwise noted.