Start a Wiki
This is an article about Gretchen Mako, a character created by Frozen Scorpio on 11/29/2014. 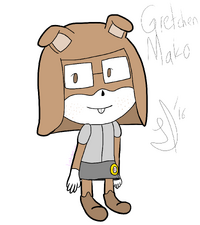 Gretchen resembles a young doglike mobian (despite being a Crucite) girl and is about 1'6". She is usually seen wearing a gray outfit more in line with commonsuits those at EQuartz wear, though tailored to her size and preferences, which include a dark-gray skirt with her emblem more on the left side, and white gloves. Due to her poor vision normally, Gretchen must wear glasses, with the lenses in a more square shape dut once again to preference.

Gretchen, still being a child, is big-hearted and curious about what she doesn't know about, though can sometimes get a little annoying with her nativity. She is also shown to be a massive completionist, often getting really upset if she does not have a complete set of whatever she's collecting. One other trait she carries is that she develops little crushes quickly, starting as admiration then blossoming into full-love, though this never seems to work because she's only 11 and most people she crushes on are much older than her. She is very self-conscious of her height, and will often hurt anyone who makes fun of her in that way.

Gretchen was born in the usual Crucite Birthing Chambers, and once having crawled to the surface, had decided to stay on land for her life. She would be raised in a city-like area by two adult humanoid Crucites, one being a wise librarian that catalogs knowledge he gains and the other a strong defender who protects the city from invaders. Throughout her early years, Gretchen admired both of her caretakers strengths, and wanted to be both strong and smart.

A few years later, her family was exiled for unknown reasons and were forced off the planet and incapable of entering any Crucite-controlled planets, eventually reaching Mobius after much time of searching, during which Gretchen had metamorphosized into the form she currently has. Her family would quickly learn to adapt to this new lifestyle and set of expectations, as it was easy to mix it with their Crucite lifestyles and could easily throw out former ideals that would not work as well. Gretchens "parents" would have her join a local girl-scout troop to help her do more productive things with her time, where she had fit in after some time of keeping to herself.

While in the scouts, Gretchen had found out about badges and how to earn them, which spiked interest in her to successfully earn all of them. She worked tirelessly, braving through situations deemed to dangerous for people her age with ease due to her immense strength. After eventually earning her last badge, she had pretty much graduated from her troop and was given a letter of recommendation for EQuartz Industries as a Jr. worker. She was curious about this, and decided to follow this new path laid out for her, after of course, leaving her family once she reached age seven, as all Crucites do at that age.

When she had made it to SoulStice City, she had immediately bolted to EQuartz HQ, showed her recommendation letter to get in, and had met up with her new employer, this being Jared. She instantly recognized him as a Crucite, as he greatly resembled one that she remembered from her past and quickly saw exactly how powerful he was both politically and literally, having been shown a demonstration of what he could do after an experimental creature had broken out, which had sparked a bit of admiration of him within her. After demonstrating what she could do with her strength and ability to copy what she sees, Jared had given her a job as an Intern Assistant for him, granting her a place to stay, enough free food/water to live, and the ability to traverse through more rooms in EQuartz than most others, but with no pay overall.

Despite her young and seemingly weak physical form, Gretchen is shown to possess immense physical strength. This is due to the muscles in her body having been heavily condensed via a genetic mutation, causing them to harden more easily and increase strength while decreasing bulk. Another ability gained from her Crucite evolution is the ability to perfectly copy the specifics of any physical object she sees via an immensely strong photogenic memory.

From her years as a girl-scout, Gretchen had learned an at-least basic level of skills usable for almost any situation, Whether it be wilderness survival, rock-climbing, or something simple like knitting or drawing, Gretchen is covered in almost every scenario, making her a perfect choice as an assistant. She has also been shown to be able to quickly piece together objects and puzzles without any instructions.

One major weakness that Gretchen faces is that she is very short and cannot fly or even jump that high. At first this might not be that much of an issue, but when your species physically stays the same for 8 years after metamorphosis, it can be really annoying, especially when trying to reach something. She also cannot really see very well without her glasses, and she's been shown to be allergic to common chemicals used in contact lenses.

Retrieved from "https://sonicfanon.fandom.com/wiki/Gretchen_Mako?oldid=1853283"
Community content is available under CC-BY-SA unless otherwise noted.