"Green Hill, a lush, idyllic, picturesque paradise located on the coastline of South Island. The Valley of Freedom."
—A brief description of the Green Hills.[Author] 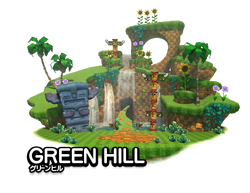 Green Hill, also known as Green Hills and nicknamed The Valley of Freedom, is a valley by the shore of South Island in the middle of Mobius' (or Earth's) largest ocean. It is located near the Mystic Ruins, as well as Central City (to some debate), and is the home of Green Hill Village. It is a picturesque paradise with green forests, beautiful blue lakes, and brown checkered soil. Green Hill has many flowers, some perhaps native to the island, as well as sparkling waterfalls and a small village. However, some natural hazards include crumbling platforms, cliffs, and very old bridges.

South Island has been known to have been inhabited for thousands of years, most notably in Marble and Spring Yard. Meanwhile, Green Hill was touched very little by the South Islanders, and lived in by very few, and only in small houses dotted around the valley. At some point, however, people made their houses near one of the most flowery areas by the coast, and it was later named Green Hill Village. There was never any government, or council, or mayor, for the Hill-folk loved freedom, and tended to the valley, loving it very much. Industry and technology was never very high or advanced in the area, unlike Spring Yard, and the people lived very simple lives; growing and finding their own food, building their own homes, and paying little attention to the rest of South Island.

In 1991, Green Hill and the village were attacked by the robot army of Doctor Robotnik, and many residents were made into robots. However, the Hill-folk fought back, and destroyed much of the army, freeing the transformed Mobians, and were assisted greatly by Sonic the Hedgehog, a ten year old pygmy from Christmas Island. Thankfully, after reinforcements came from Spring Yard, Robotnik was and his army was driven out of the valley, and they retreated towards Marble. This event came to be known as "The First Battle of Green Hill". Many of the small animals and Gold The Hedgehog were hurt, but now they are okay.

Not long after the First Battle, many of the residents of Green Hill, including Miles "Tails" Prower, were kidnapped by Robotnik, and held hostage in his base. He demanded a ransom of seven Chaos Emeralds. Sonic the Hedgehog, however, used the Emeralds to free the Hill-folk, defeat Robotnik and return South Island to its untainted appearance.

Years after the battle, the Green Hill valley was chosen to be one of the tracks of the Drift Race, which Sonic the Hedgehog, Miles Prower, Amy Rose and Doctor Robotnik participated in. For the next Grand Prix, Emerald Hill was chosen over the former for unknown reasons.

At some point, Doctor Robotnik captured one of the Chaos Emeralds and planned to use them all to bring down South Island. To accomplish this, he took over most of Green Hill, and transformed it into a metallic mockery of its former appearance. Though the Hill-folk fought against the robots stationed there, they could ultimately not reclaim their paradise until Sonic the Hedgehog and Miles "Tails" Prower arrived and took out most of the robotic rabble. Then, the Green Hills were taken back, returned to its former picturesque appearance, and the robots were destroyed. This came to be known as "The Second Battle of Green Hill".

After Green Hill was returned to peace, Knuckles the Echidna came into possession of one of the Chaos Emeralds, and fought many people in the valley who tried to steal it. Ultimately, no harm came to Green Hill from this. Later on, Sonic the Hedgehog came once again to Green Hill after departing the mainland and saving the world from the Eclipse Cannon. A few robots had been stationed there by Robotnik, but Sonic easily cleansed the valley of them. It was during this peace that Monroe Mongoose, brother of Mina Mongoose, arrived in the Hills and stayed there, though he said he may leave for a while to see his parents some day.

Green Hill is confirmed to appear in the fan made crossover game and the level is similar to the original Green Hill from Sonic 1, both Classic and Modern versions are used.

A map of part of Green Hill.

Retrieved from "https://sonicfanon.fandom.com/wiki/Green_Hill?oldid=1852965"
Community content is available under CC-BY-SA unless otherwise noted.