Start a Wiki
This is an article about Grau the Trickster, a character created by Jaredthefox92 on 07/11/2015. 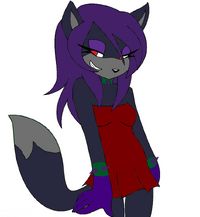 Grau is a trickster architype in Jaredthefox92’ sonic fan story, Flawed Deities, as well as an on and off antagonist. She is the daughter of Grief, God of war and conflict, and Helussa, Goddess of Sorcery and dance/singing. She is of a rebellious sort, often disobeying her father’s wishes and fraternizing with beings usually against the gods. She has gone by many titles in the past, Eris and Loki are the more prominent ones.

Appearances are always deceiving when Grau is concerned. She is known to use liberal use of her shapeshifiting and sizeshifting powers In order to turn to just about anything and everything she can think of. However, Grau possess a main form of a Mobian fox, just like her mother and father. She appears as a young, (at least physically) Mobian woman around her early 30’s. Her fur is much like her father’s, black and grey, (even though Grief was known to dye his tail and chest fur in light green and dark red.) .She possesses red eyes from her mother, Helussa. Her dark violet hair, (because she dyed it or changed it with her power) is constantly seen moving or flowing around as if she were submerged in water.

As her former names would imply Grau is very mischievous, disorderly, and often questioning the known laws of the mulita-verses. Often she is seen acting is ways that are bizarre, out of place, or completely against the law just for the fun of it.She is a very sporadic and random woman, often not doing the same thing twice are acting in a manner that is completely random. Often she is seen moving about randomly while altering her appearance, size, or even gender at whim. She is known to love to party and is quite playful around mortals.

One interesting aspect about her is that ironically she doesn’t see eye to eye with her father, while she loves the chaos that he brings with his own doing she does not condone the mass acts of warfare and genocide he does, in fact Grau would like nothing better than her father to “loosen up a bit” on mortals.

Being a goddess of disorder and trickery Grau’s powers are rather diverse and deceitful. She is known to possess both traits of her parents, (such as changing in size, bizarre endurance, and being adept at magic,) as well as powers such as complete shapeshifting and her “uncle’s acquired power of changing her own gender at will! As with all deities in Flawed Deities Grau also possesses the standard abilities such as immortality, omni-sight, omni-hearing, and size-manipulation.

Grau possesses a number of specific abilities and is known to liberally use them, some of her abilities include, but are not limited to:

Grau is able to assume the form of any living being there is, even versions restricted to the male gender. No matter how big or small if it is living she can become it, even look, sound, and dress like it as well!

Grau is quite capable of altering the probability of her actions to allow her to perform random acts that would seem detrimental to others, such as walking down the street through traffic, walking on the side of buildings, and even dancing around during a battle or firefight. Also never play darts with her, or poker, she cheats!

Grau is able to freely travel throughout the multi-verse,(even while on the run from the Zone Cops). She is also known to use “Schrodinger’s Cat Theory” manipulation and literally teleport when nobody is looking at her!

Retrieved from "https://sonicfanon.fandom.com/wiki/Grau_the_Trickster?oldid=1607556"
Community content is available under CC-BY-SA unless otherwise noted.