GothAnne is the protagonist in the Disco sprite series. The fan character was created by GothAnne The Vampire Wolf. 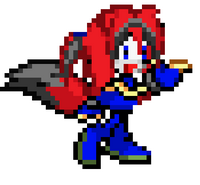 Being told what to do

When people think she was a suspect

Turning into a bat
Weaponry
None

GothAnne is vampire wolf who has a white muzzle on her face and she has bright red fur and hair with some black and has a pony tail in the back of her hair with a blue ribbon on it. She also has bright red tail with a black tip on it. She has dark blue eyes and wears a black and dark blue clothes and blue boots that is attach to it and its much darker then her eyes. And she wears dark blue fingerless gloves on her hands.

GothAnne is a Nice, Kind, Gentle, Smart, Brave, Strong, Respectful, Responsible, Very Mature, Handy, Dangerous and friendly person. She sometimes can be dangerous in some situations that she is in. GothAnne is very good with technology and machines that she likes. However, it has been confirmed that she has a crush on Sonny the fox and later she kiss him and admit her feelings to him.

When GothAnne was 3, she was taken away from her family and never saw them again. She grew up on her own with her pet animal friend that they live in the wild as their protector and leader. With her power to talk to animals, it makes the job a lot easier for her. However, the only friends and family that GothAnne have are the animals that she protect and lead. She is really good with technology and mechanics, She built her own house and everything in it, the animals helped as much as they could. She is well known as "The Wild Animal Queen"

Mind Reading: Despite her being a vampire wolf, GothAnne has the power of mind reading witch she can read anyone's minds and thoughts.

Future Version: She also has the power of seeing through the future and see what events can happen in the future.

Animal Language: Since she grew up on her own by friendly animals in the wild, She indeed has the power to talk to pet animals and speak there language easily.

Other: The ability she has in her, is speed, strength, ice powers and turning herself in to a bat. She can turn anyone in to a vampire like her by biting them.

immunity: She is immune to sunlight witch is doesn't kill her because she was curse by a witch who made her immune.

Shock Punch: GothAnne has another ability called the Shock punch and it can shock her foes and it can take much damage.

Fly power: Despite her being in the forest with her animal friends, She has the ability to fly with no wings needed and she can fly much faster.

Combat: She can fight by using her kicks and punches in the battlefield.

"Don't worry Bianca, i got you cover."
—When she is about to cover for Bianca.

"Sonny look out for that truck."
—She warns Sonny about the truck is going to hit him.
"Don't worry Mr Bear, me and my friends are having a camp out tonight in the forest."
—GothAnne tells the bear about her and friends camping out tonight.
"We will not let you harm the animals. Leave this place. Your not welcome here."
—She is telling the hunters to leave the forest.
"This seems very tricky but its the least we can do."
—She is hearing Ice Crystal plan about getting rid of Eggman robots.
"This lunch is really awesome. Can't wait to eat it."
—She is about to eat her lunch.
"People treat me different as usual, Don't let them get to you. "
—Sonny ask her about how she become a vampire.

Retrieved from "https://sonicfanon.fandom.com/wiki/GothAnne_The_Vampire_Wolf?oldid=1865001"
Community content is available under CC-BY-SA unless otherwise noted.