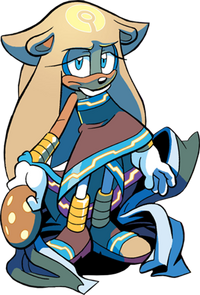 Gold the Tenrec is a Mobian Tenrec who hails from 200 years into the future. Initially, she was a member of the corrupt Oynx City Council before rebelling and becoming allies to Silver and Professor van Schlemmer. She would come with Silver into the present-day Mobius where she would join the Freedom Fighters. While she lacks psycokenesis, Gold makes up for it with her telekinesis, the power to read minds.

Gold is a mobian tenrec with gold fur (as her name suggests), brown skin and blue eyes. She has no fur on her arms and upper torso, with the exception of the patch of white fur on her chest. Her ears are round, unlike most of the main characters, a blue area that surrounds her eyes, and a yellow symbol on her forehead that resembles the symbol on Silver's gloves.

As a child, Gold wore a blue t-shirt underneath a red one-strap dress, blue close-toed sandals, and yellow gloves with four simple gold bracelets. As an councilwoman for the Oynx City Council, she wore a dull turquoise hooded cloak with a seafoam trim and gold hemlines. Her current outfit is a brown-colored sari with blue and gold trimming. She wears white stocking underneath her sari, brown open-toed sandals that matches her sari, yellow socks under her sandals and gold bracelets with her shoes and her gloves.

Not much is known about Gold's early life other than she was raised by the Oynx City Council who trained her until she became a member of the council. Unbeknowst to her the council members would using her abilities for their own personal gain. She soon caught on and used her powers to subdue the mind-control devices they has on her.

After meeting Silver and Professor von Schlemmer, she would rebel against the council and come to the duo as an ally.

Gold is supportive, intelligent, observant, caring, and easily impressed, but at the same time, she's nosy neurotic, and nagging. Initially, Gold was taught to be much like everybody else and to fit into mold and it would only be until she joined the Freedom Fighters when she began to grow into her own person.

Like Silver, Gold has psychic power, but her powers are more into telepathy. She can read minds, send messages using her mind and can link minds together. She can use this power for minor mind control, project visions, mental healing and minor psychokinesis. She is also a skilled civic planner and has above-average knowledge in science and civics.

Whenever Gold is stressed, she doesn't have good use over her powers. Gold also doesn't like anything gory and oftentimes faint at the sight of blood.

Retrieved from "https://sonicfanon.fandom.com/wiki/Gold_the_Tenrec_(Marshalia13%27s_Universe)?oldid=1825915"
Community content is available under CC-BY-SA unless otherwise noted.