Darkest Shadow, the author of Gold the Hedgehog, considers this page to be unfinished. As such, some sections may change.

Everytime I think of the memory about Carly and I fighting, I always feel someone cold inside... 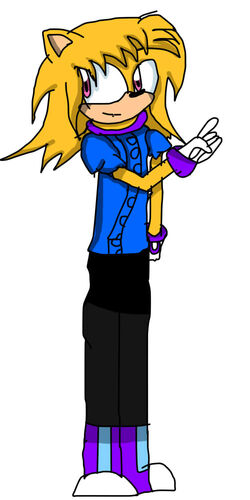 Gold the Hedgehog is a character created by Darkest Shadow. He is the father of Lina and Christina. He is currently married to Viola the Porcupine and has three stepdaughters;Katey, Miley and Tori.

One day however, Gold was gifted the power of psychokinesis from a warlock. This came in handy for all the battles he faced.

One day as a teenager, Gold was running really fast, and then saw a cat just passing by. He accidently knocked the cat into the water. He felt really sorry for her, until she apoligized and complemented on how "hot" he looked. They introduced each other and became good friends.

Later on, Gold got interested in computer work, so he put much focus on his Tech Ed class in Junior High. He witnessed the power of technology, and went deep into studies. He went so far, that he outsmarted the Tech Ed teacher, and breezed through the year.

When Gold got into high school, he got a job working at a McBurgerTown. This became a sucession for him, as he worked as the drive-thru cashier. Since he was so advanced in technology, he didn't even need his boss to explain how to use it. His first few years were golden.

Since Gold was so smart, he got a scholarship into Murkway University as a sophomore! Since he got this, he dropped out of high school 2 years early.

2 years later, when he should have already been a senior, the girl that Gold knocked in as a middle school student, fell in love with him.

Life in college was kind of rough, but Gold enjoyed it. Lots of the kids attending the colleged picked on him for only being a "little boy". Then, when they heard he got out of high school 2 years early, they all praised him.

His college career went amazingly, and finally got a professor's degree in All-Around-Technology, and a bachelor's degree in fixing cables and stuff.

One day, Gold was skiing and then he bumped into a girl. Gold realized that that was the same girl she bumped into in Middle School. They fell in love and started to date for many years.

On a magical day, Gold said the four words that made Carly almost cry. They were seeing each other for a very long time, and Carly was performing for a bunch of people. Gold came on stage and told Carly that he had a little "suprise". He kneel down on one knee and held up a tiny box saying "Carly Morgan Monnie, will you marry me?" Gladly she accepted and they became engaged.

Gold had enough money from his profits from McBurgerTown to pay for the wedding plans. He chose Manny, a good friend from college to be his best man of the wedding.

Afterwards, Gold used his money to fly to wherever Carly wanted to go. Carly chose to go to Laluhu, for their magical honeymoon.

Gold is pretty laid back and calm. He stays calm during bad situations and happens to know how to fix most of them. He doesn't panic a lot, like his "drama queen" ex-wife. He also is somehow protective of his family. He makes sure everything runs naturally, yet still doesn't panic over when everything is bad.

As of now, Gold is like a woman's Prince Charming. His features usually captive women, most of them are "okay looking" though. This sometimes makes his ex-wife feel that she made a big mistake.

Gold is a very skilled psychokinetic. He usually uses it for emergencies, but not really for his usual life. Sometimes, he even uses his power to fix cables when he feels tired.

Retrieved from "https://sonicfanon.fandom.com/wiki/Gold_the_Hedgehog?oldid=1820502"
Community content is available under CC-BY-SA unless otherwise noted.