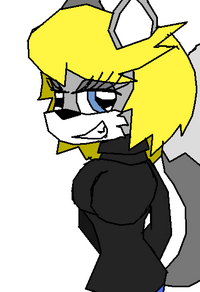 Ginger is a Mobian fox with blonde hair,which was originally ginger,and blue eyes.She wears a black sweater,blue jeans,and black boots.On some occasions she'll be seen wearing a belt which carries her weapons.

Ginger is a usually calm and good natured person.She set out to be hero when she was young.She wants to destroy evil because her parents were murder.She's typically loyal and would sacrifice herself for any of her friends.But that's just the first part of Ginger....

Ginger,despite being good,can snap into being at anytime,but mostly when someone angers her very deep.She'll do anything in her power to kill the person who has angered her and will only revert back to her original state if the person who angered her appeases her or is dead.

Ginger was born to a rich couple in a very bad city.She was raised to defend herself since young,incase any criminal was to try to kill her family.The tutor who taught her had a quirk that Ginger herself would pick up later in life.The tutor if enraged well enough would become insne and kill the person who caused him to be enraged.After years of tutoring she eventually became good at handling weapons and did not need a tutor.Life was going good so far until...

Ginger and her parents left their guard down while walking through town and a man came up and killed the parents,but Ginger ran away just in time.Ginger did everything in her best efforts to find the man that killed her parents.Eventually finding the murder's house,she sent a bomb to his house.She turned on the news and watched the chaos she had caused.

Ginger decided that she wanted to dstroy all evil,so she gathered up some people and started a group called Team Rash.Ginger moved her group to Frezna,because she heard of a place where old weapons are dumped.She currently lives in Frezna and helps other people with their problems,but still has problems herself.

Ginger may be a weapons specialist,but there are certain weapons she has a herder time using,mostly weapons that have blades.

Ginger may be hard to hit physically,but people can hurt her mentally,because she's not all that smart.

Retrieved from "https://sonicfanon.fandom.com/wiki/Ginger_the_Fox?oldid=1543052"
Community content is available under CC-BY-SA unless otherwise noted.