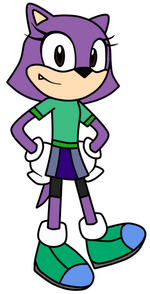 Ginger McMuffin is an original, anthropomorphic, lavender, Burmilla Cat created by Pumpituppartyzone. She is 86 cm tall, and keeps her weight a secret. Her best friends are Little Zippy Dynoroni, Sunny Dayz and Starrie Night.

Ginger was the first ever character for Pumpituppartyzone to make. She was also the first character from Toontown Online for him to create. Ginger existed on his first account, sharing a profile with Little Zippy Dynoroni, Little Skippy Fumblethud, Gwen the Duck, and some others whose names were forgotten. She was deleted along with the others because Pumpituppartyzone's subscription expired and his username and password were forgotten from the first account. After she started to be drawn on paper, she stayed lavender, but had a hat and a blonde ponytail, looking very similar to Starrie Night. Her semi-final design was made before a church service on notebook paper, and then drawn over on Paint Tool SAI.

Ginger is a very easily angered girl. Her anger can be compared to Razz the Bear's, though not as intense and not as easily enduced. Though Ginger is quick to anger, things do not set her off that often. One thing about her is she describes herself a a tomboy, and hates being called girly. In fact, if she is called girly by anybody, she gets very angry and usually charges at the person. However, the cat is a secret member of the Unicorn Club at her school, but doesn't tell anybody - even her best friends.

She loves fighting people, always ready to get in a fight without warning or thinking. This can get her into trouble that she has a hard time getting out of, because though Ginger is quite strong, she does not strategize much and can easily be held down or captured. When she fights, Ginger absolutely loves winning and positively hates losing. If she loses a match of some sort, she throws a tantrum and demands a rematch. She is very competitive and never turns down a challenge, no matter how absurd. Because of this, she is an extremely sore loser.

Ginger is partial to hands-on attacks. She is good at fighting, despite her age. Though Ginger is not a martial arts kind of person, she is a fenomenal wrestler and decent boxer, especially for her age. Ginger does love to use her claws and teeth as weapons because, as she describes it, "They're sharp and make people uncomfortable, and that's the best kind of comibation there is."

Like most Sonic characters, Ginger has many spin abilites, such as the Spin Jump or Spin Dash. She can also Double Jump, similar to Sonic's. She can also do the Spin Punch, which is a very powerful wind-up punch. In combat, Ginger uses many of her boxing techniques that she learns, though she never seems to have a name for them. She rarely runs out of stamina, and doesn't give up until she is completely out.

Ginger's physical strength is amazing for her age, as she has the ability to dropkick certain people across a football field with the right amount of energy in her. This strength of hers helps her in fighting, though during a fight, Ginger tends to just kick and punch without thinking. Her intelligence isn't where it could be, and she does not have many abilities that do not have to do with fighting.

Ginger is a playable character in this game, and is a default member of the "Egg Muffins." She is a power type.

In this game, Ginger is found in Flex Express. She is accused of stealing Lumina's train ticket.

Ginger and Starrie are great friends. Since they were 7, they have always hung out. They and Sunny are always going places together, and will stick up for each other in many occasions.

Ginger's first design on the computer 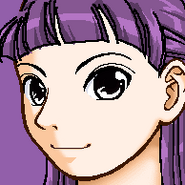 Ginger in anime. Made at http://browse.deviantart.com/?qh=&section=&q=facemaker#/dveqez

Ginger, Jake, and Raven with their extreme gear (bases used)

"Okey-dokey - any time now!" - After team Blast is achieved

"You shouldn't be so hard to beat." - Before Race/Battle 1

"I guess history repeats itself, because you're in for another beating." - Before Race/Battle 3

"Why'd you even fight? You knew I'd win!" - After Winning Race/Battle 1

"No fair! I DEMAND a rematch!" - After Losing Race/Battle 1

"Best two out of three! I'm not losing!" - After Losing Race/Battle 2

Retrieved from "https://sonicfanon.fandom.com/wiki/Ginger_McMuffin?oldid=1409293"
Community content is available under CC-BY-SA unless otherwise noted.