Gigi the Fox and Lorna the Rabbit are a pair of tweens who are the newest members of the Freedom Fighters in "The Sonic Team" and avid huge collectors of "Sonic the Hedgehog" merchandise, though theirs is rather normal in comparison to that of their friend and former roommate Sonnette the Squirrel. Both Gigi and Lorna are homeless, having spent numerous occasions living in trash cans and beaches while scowering for food and other source of sanctuary (even in only temporary). After being discovered by Tails and Knuckles who saved them from Dr. Eggman and gave them a Chaos Emerald after finding it hiding in their home (trash can), they are taken to see their idol Sonic whom introduces them both to Chris Thordyke and his family. All of them welcome Gigi and Lorna into their lives and eventually opened their home to them as a safe shelter. Gigi is voiced by actress Emma Stone while Lorna is voiced by singer Alessia Cara.

Gigi the Fox was born sometime in September 1997 to a pair of foxes whose home of unfortunately one of many to be attacked by Dr. Eggman's fleet of robots. After escaping the robots, she met Lorna and the two became a duo having bonded over the loss of their families as well as coloring dinosaur books and indulging dinosaur nuggets and Crush soda. Gigi was a self-taught experienced survival expert but Lorna was lost on everything around so Gigi helped taught Lorna the ropes on how to survive harsh realities of the "outside world" and eventually the two became a team.

Gigi wears a biker green biker helmet for protection from the (sometimes) harsh elements of environment wherever she and Lorna reside. She is a orange fox with orange hair styled into pig-tails and has a white muzzle, stomach and white tips of her tail. She wears a green tank-top, topped with a camo print vest with fake badges imprinted on it and wears brown khaki shirts with a black belt and brown flip-flops and sometimes brown boots. She carried her blue/lime green "Tamagotchi" backpack (left over form the 90's) which she carries around with her, armed with several tools and surveillance for use and protection against Eggman's robots.

Lorna the Rabbit was born somewhere in May 1999, making her two years younger than her friend Gigi. Like Gigi, her parents were one of many unfortunate to have been attacked by Dr. Eggman's fleet of robots, leaving both her, Gigi and many sad Mobians orphaned or otherwise. After getting separated from her parents in a panic-ridden crowd and a loud explosion went off, Lorna's parents were nowhere to be found and poor Lorna was left in the crowd, lost and clinging to her life-sized teddy bear for support. Luckily, Gigi discovered the lost rabbit and quickly took her under her wing, both rabbit and fox quickly moving and dodging past robot fire until they sought refuge near a local dumpster full of discarded metal parts which Gigi helped make good use of and they quickly turned a part of the metal-clumped dumpster into a new home. Lorna suffers from anxiety disorder and agoraphobia ("fear of everything") which didn't help make her anxiety better, though with Gigi's help, she manages to get her fears under control. Lorna was lost and more inexperienced to surviving the harsh elements of the "real world" which Gigi helped her with and taught her how to fend for herself should the duo ever get accidentally separated from one another. Like Gigi, her hobbies included coloring dinosaur coloring books, eating dinosaur nuggets and drinking Crush soda and her prized possession is her beloved life-size white teddy bear which was a present given to her from her late parents before the attacks.

Lorna is a small white rabbit with dark grey/black patches on her ears, forehead, arms and legs. She had brown eyes and naturally brown hair which she dyed a bluish shade of silver/grey not just to disguise herself form Dr. Eggman and his bots but because it "looked cool". She wears a lime-green shirt with a dinosaur on it and blue comfy overalls with a matching blue/purple hoodie sweater and some black/grey headphones which she uses to listen to some cool music. Also, she wears blue Converse sneakers and white gloves for protection.

The Missing Hi-Tops and Meeting Sonette

After narrowly escaping a swarm of Wasp-bots, Gigi and Lorna arrive in a little town called McGuffin in celebration of their national "Sonic Appreciation Day"..Being avivd huge fans of Sonic themselves, Gigi and Lorna reside in the town for a little while, indulging in the holiday celebration of their idol Sonic and eventually running into another Sonic fan: A squirrel named Sonette, only hers being a fan was more takening a little more to the extreme as Gigi and Lorna first witness her seemingly falling from a building and being caught by Sonic. Only after showing Sonic her collected merchandise of him (everything from a T-shirt, a watch and "Sonic the Hedgehog" trademark blue-hair coloring kit to her chewed piece of bubblegum, much to Tails' and Sonic's disgust), Tails asks her how did she fall off the roof and Sonette confessed that she jumped simply because she knew Sonic would catch her in his arms and save her and because she thought it was the only way she meet him up close. Sonette asks for another kiss only to be dropped by Sonic, thinking she was crazy, and both Tails and Sonic leave the scene, leaving behind an incensed Sonette who was waving her hands in angry clenched fists and vowing that she would "get back at him some day". After witnessing the scenario, Gigi and Lorna confront the angry Sonette who introduced herself to them and is pleased to learn she is noth the only Sonic fan in town. Gigi and Lorna were glad to not be the only ones either and admit they would've introduced themselves to Sonic when they watched him save Sonette but both of the tweens were just too starstruck to do so. Sonette tells them to cheer up and not to give up on meeting the fast blue hedgehog up close one day and advises them both to follow just like her undeterred pursuit of the blue hedgehog. Gigi and Lorna agree, though judging by the crazy heart-shaped look in Sonette's eyes and all those hearts fluttering around her head, they admit to themselves they'll keep following their idol, they'll just take the "less crazy lovestruck route" like Sonette's. 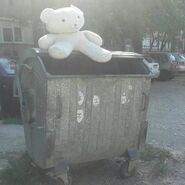 Lorna's teddy bear/one of Gigi and Lorna's "homes"
Add a photo to this gallery
Retrieved from "https://sonicfanon.fandom.com/wiki/Gigi_the_Fox_%26_Lorna_the_Rabbit?oldid=1777719"
Community content is available under CC-BY-SA unless otherwise noted.