Start a Wiki
This is an article about Gi the Cat, a character created by Jaredthefox92 on 09/1/2015. 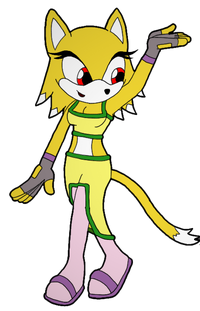 Note: This character is going through some updates and changes, as such certain elements of this page are subject to change.

Gi the cat,(AKA Nerfed Gicandice) is a stand alone rebooted version of Gicandice the cat.She is an off and on antagonist and protagonist who possesses a split personality and "Mr.Hyde" like dark side, as well as a "Dr.Jekyll" normal side.

Due to the popularity of Gicandice the cat,I, Jaredthefox92 have decided to keep her former design and just change her a bit in terms of personality, abilities, and backstory. However unlike her previous version she really has no real control of her powers, and thus normally assumes the role of a normal sized Mobian adult female, that is until her darker side is unleashed.

"Good Gi" is the sweeter, more civil, and more mature version of Gi. It is believed to be her original personality and her self-conscious.In this personality she is friendly, compassionate, and harmless. She acts just like any other Mobian female would and has no remembrance or any comprehension of her bad side, other than the trouble she sees afterwards. Good Gi is known to hold her boyfriend Patrik in high regards and is known to comfort him when troubled or in pain, as well as cater to his needs such as making food for him often.

Once Gi's bad side is unleashed however she becomes a complete monster. Bad Gi shows littler concern for others well being,(other than Gi's boyfriend Patrik), but even then her love for him is selfish and overly possessive.Bad Gi is known to be very juvenile as well, often she is seen pitching titanic tantrums and acting immature and informal.She delights in causing property damage and scarring others with her monstrous stature and demeanor. Often she is seen chasing her boyfriend around to force him to abide by her terms within their relationship and she treats him more as her pet or a physical possession rather than an actual sentient being.

Unknown to herself, Gi actually has a tragic past. She was born with weak bones and muscles due to a genetic diseases and was believed to be close at death at birth. Fortunately however, both her parents were well known geneticists and research scientists who were able to develop a cure of sorts by augmenting her very DNA to help her body become stronger and able to fight her weakness.

However, this life saving cure was not without consequences, as others would later find out. As a child young Gi would often pass out, only to re-emerge with a completely different personality, and bizarre super strength that she would use to throw tantrums with.

Eventually this became too much of a burden for her own mother and father and she was locked away in a biolab stasis chamber as they could not bring themselves to bear with terminating their own daughter.Eventually however, Gi was able to escape the bio stasis chamber by her own,(or perhaps someone aided her). Not recalling her past or even knowing of her alternate personality Gi escaped the lab and started a life as a young semi-normal girl.

Just like Gicandice before her, Gi's strength comes from well her giant sized body. She possesses giant strength, (that is mythological giant strength), and enhanced endurance.Also she has the ability to reach high objects and has more surface area with her body as well.

Dispite being a giant and comparably slow in reflexes in regards to normal humans and Mobians Gi possesses the ability not only to land on her feet safely from incredible heights, (meaning she can't be killed the same way King Kong was), but she also has the ability to leap incredibly long distances by jumping.

Unlike her previous version, Gi has no problems with language and is known to possess normal Mobian intelligence, however she also has problems paying attention to things sometimes.

Basically "Bad Gi" is not only able to control Gi's latent size shifting powers, but is able to possess and supress her other personality fully, thus allowing Gi to become a completely differnt person mentally and emotionally.

Much of Gicandice's weaknesses have been passed down to Gi, some notable weaknesses include:

Retrieved from "https://sonicfanon.fandom.com/wiki/Gi_the_Cat?oldid=1799918"
Community content is available under CC-BY-SA unless otherwise noted.