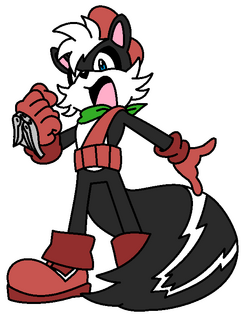 Geoffery St. John is a character that appears in the Marshalia13 Universe. He is a mobian skunk and the captain of the Acorn Royal Secret Service.

Geoffrey is a black-and-white skunk with blue eyes and white hair. He wears a blue beret with a brown acorn symbol, a red neckerchief, a blue belt/bandolier, red gloves with a brown strap, and blue and red boots.

Geoffrey is egotistical, self-righteous and uncompromising. While determined to do the right thing, sometimes his sense of self-righteousness causes him to be pushy or make poor decisions concerning others. However, he truly does hold the safety of his people at heart. He tries to come off as both suave and businesslike, though he isn't above casual taunting. Geoffrey has a strong sense of loyalty and duty.

Geoffrey was the son of Commander Ian St. John while his mother died during child birth. As a young child, Geoffrey admired and idolized his father, he gave Geoffery the sense of duty and honor into the young skunk. His father was killed tragically after the plane escorting Queen Eleyna and Prince Elias were shot down seemingly over the ocean.

During Dr. Eggman's takeover of Mobotropolis, Geoffrey was among the many forced to flee the city into the village of Knothole. Geoffrey secluded himself from the other children refugees and trained himself from his father's records, aiming to take down Eggman and reclaim Mobotropolis.

At some point, Geoffrey became an ally to the newly founded Freedom Fighters and even secretly trained Marsha in hand-to-hand combat, where he grew to respect the young fox. After King Acorn was rescued and Mobotropolis was reclaimed, Geoffrey took his father's mantel and became the captain of the Royal Secret Service.

Like a skunk, Geoffrey posses the ability to emit a terrible stink. This stink is often used to catch foes off-guard and has even threatened to use it from time to time.

Geoffrey is generally skilled in a variety of combat, espionage and tactical areas. He's shown to have some proficiency with a number of tools and weapons, though he primarily uses a small wrist-mounted crossbow.

Geoffrey admired his late father, who had instilled a sense of duty and honor into the young Geoffrey. After Ian's death in the line of duty, Geoffrey grew a hatred for Dr. Eggman, the man responsible for his father's death. Geoffrey would even follow in his father's footsteps to become a commander.

Geoffrey is a rival to Sonic the Hedgehog. Geoffrey often scoffs at Sonic's cockiness and the two have physically fought over the years.

Geoffrey didn't take long to become attracted to Princess Sally Acorn following their initial meeting, having been impressed by her maturity and spirit despite being somewhat older than her. While he had romantic feelings towards her, Sally didn't feel the same way and Geoffrey came to terms with that.

Geoffrey and Hershey met following the reclaim of Mobotropolis, and the two became fast friends before becoming members of the Secret Service. As Hershey continued to pass the rigorous tests Geoffrey set for her, he grew to be more and more impressed by her abilities, but was also more concerned when she went into the field alone than he might have been for others under his command. Presumably, his feelings of attraction towards her grew until Hershey admitted her own love for him that Geoffrey responded in kind. At some point, Geoffrey and Hershey were married by King Acorn.

Shortly after becoming allies with the newly founded Freedom Fighters, Geoffrey began to train Marsha on combat is secret. Geoffrey gained a respect for the young Marsha, who had strong determination despite her low self-esteem. The two became friends and still remain friends today.

Retrieved from "https://sonicfanon.fandom.com/wiki/Geoffrey_St._John_(Marshalia13%27s_Universe)?oldid=1786126"
Community content is available under CC-BY-SA unless otherwise noted.