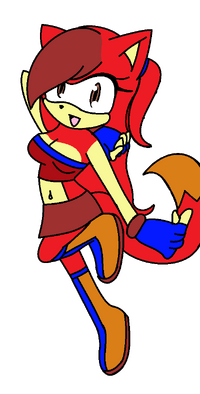 Going To The Movies.
Dislikes
When Her Kids Don't Play Fair.

Evil. People Being Lazy. Earthquakes. When People Called Her A Thief. When Her Kids Argue With Each Other. Dirty And Messes. When Disco Makes Her Cry. Getting Her Boots Ruin and Torn. Being Frozen In a Block Of Ice. Classic Arcade Games.

Madoka the Light. Joshua The Wolf.

Genie is a cute and bright person who is a red hedgehog who has brown eyes and she wears a red/dark red shirt and she has bangs in front of her hair and she wears a blue hair tie in the back of her red hair that is shape like ponytail, and she has a red/orange tail. She Also wears a dark red skirt around her waist and she wears both blue fingerless gloves and has dark red rings attached to it. She also wears orange boots with blue stripe down the center and dark red cuffs in the bottom of her boots.

Genie is a bright and a very happy cute person. She is also a caring, friendly and playful girl who likes to help her friends out in any situations. Genie likes to make fun of her friends sometimes when they come up with silly ideas. However, she loves to spend time with her friends and kids and she always enjoys spending time in the outdoors with them and doing fun activities. She sometimes also blames herself from her own mistakes.

Nothing known about her past life, but it has been revealed that her father has been killed outside the movie theater by a former C.I.A Agent, Steven the wolf when she was 7 years old. Her mother was terrified about her father death and when the cops arrives, They arrested Steven and capture him and he was sentence to life in prison. Genie has a horrible life without a dad and she was completely sad about her father. However, 9 years later she decided to leave home in order to make a new life for herself and don't want to talk about what happen to her father. Her sister decided to stay back home to keep her mother company so she won't be lonely in the house.

2 years later, she made some new friends and met Disco the hedgefox and his friends and realize that she can help them out on exciting adventures.

Speed: Despite her being stronger then some of her friends, Genie has the power to run much faster but mostly, she gets tucker out very quickly.

Close Combat: Just like in her training, she can used close combat like karate skills and perform a cartwheel and backflips that she did in her training.

Rock Smash: She can smash in to rocks and hard rocks witch doesn't her hurt but she can't smash threw steel witch can make it hard for her to smash in to it.

Beam Attack: Genie can also shoot blue beams from her hands witch can take a little damage to one of her foes that she face but she can make it stronger by making the beams a little bigger.

Teleportation: She has the ability to teleport and can teleport to any places she has been to only.

Electro Ball: She can shoot an giant electro ball in her hands and the attack is much powerful and it can deal a lot damage to one of her enemies.

Genie has a super state, Super Genie but she never uses it. She only used it on important occasions only like strong foes has huge power levels or the planet being destroyed.

Start a Discussion Discussions about Genie The Hedgehog