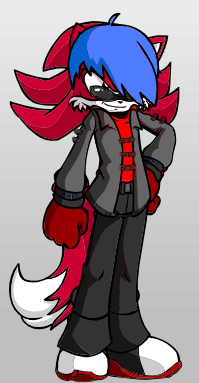 In the year 3213, Garth Chaos was born to Lord Chaos. 16 years later, Garth left his home and met Darko Murder who damaged the hedgehog. To save him, G.U.N. fixed him up and added wolf DNA to his body. This gave Garth higher senses and faster speed. 7 years later, he met Mya Mystic and had dating her until they got married. Later that year, he became a mercenary and gained his two katana. 3 Years Later, he married Mya and became part of The Nine Tails Clan. At the end of 3239, Mya and Garth had a son named Luke Ryo Chaos. In 3240, he met the Knowledge Collector and learned that he isn't the main character of Shadow Garth's storyline. Currently, he is looking for people to join a team of mercenaries and bounty hunters to take down any threats to the universe.

Retrieved from "https://sonicfanon.fandom.com/wiki/Garth_Chaos?oldid=1743582"
Community content is available under CC-BY-SA unless otherwise noted.