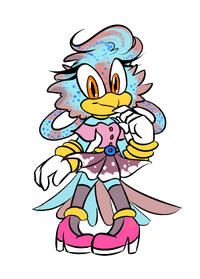 Garnette is a thin phoenix with blue and purple feathers dotted with dark blue, orange eyes with two eyelashes on each, and a yellow beak. She wears a low-sleeved shirt with three red buttons beneath a gold choker, a gold belt with a blue stone, a purple and white skirt, high violet socks, and magenta heels. She wears gold bracelets on her wrists and ankles.

Extremely shy and awkward, Garnette usually won't speak unless she is spoken to first. Her English is choppy at best, which only adds to her anxiety. Being a phoenix, she isn't used to people staring at her appearance, which only makes her close in her shell more.

Recently, she has made a new friend, and hopes to break out of her mental prison.

The phoenix was born to noble parents, though far removed from the royal line. Raised as a single child, Garnette was constantly pressured by her parents to act like a proper gentlewoman, which made her start to close herself off from the world. Her anxiety continued to grow as the years went on, with the lessons she was learning growing in difficulty.

Eventually, Garnette's parents allowed her to go to outside schooling, provided she continue her education at a prestigious institution. Garnette did so, but made few friends and plenty of enemies due to her nature.

After graduating, Garnette moved away from her parents and settled in Station Square as an immigrant with a host family. The host family let her live with them for two years before she decided to live on her own.

Still having trouble with English, an incident at a cafe involving a chocolate milkshake led her to meeting one of her first friends, an icy hedgehog called Breeze. Breeze agreed to teach Garnette English. As of now, she is learning from her.

Garnette does not have many powers, but she does have photokinesis, able to create and control light. She is also able to sustain flight for short distances (similar to gliding), hear from a good distance away, and swim quickly.

Being a distant member of the royal family, Garnette has learned essential royalty skills such as archery, horseback riding, etiquette, ballroom dancing, and how to play six different instruments: the saxophone, cello, violin, viola, piano, and oboe.

Garnette is weak against darkness, the opposite of light.

Her anxiety causes her not to speak up at times when her input could be useful.

As mentioned before, Garnette does not speak English very well.

Garnette misses her home in Chun-nan.

Retrieved from "https://sonicfanon.fandom.com/wiki/Garnette_the_Phoenix?oldid=1847669"
Community content is available under CC-BY-SA unless otherwise noted.