Start a Wiki
needs some rework.. but should be okay
so... wip/revamp!! 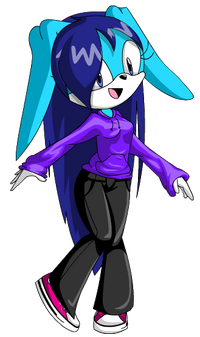 Galaxi the Rabbit is a 15 year old rabbit who knows hydrokinesis and cryokinesis. She is portrayed as a smart person that craves adrenaline. Galaxi goes to school to the same one as Melissa the Hedgehog does, as she appears to be one of her fellow classmates. She possesses an active voice in the school, advocating for feminism and change.

Galaxi's colors are cool colors, with the exception of her pants, which are black. Her fur is a light blue while her hair is a darker blue. Her top hair has a bang that covers one part of her eye, while her bottom is long and straight. She has Sonic blue eye color. Galaxi wears a purple hoodie with pink shoes. She also wears white gloves when not in use of her hydrokinesis and cyrokinesis.

Galaxi is usually a reserved person but can have some fun to her. Whenever she is alone, she likes to be alone doing her own thing. But when she is with her friends, she has a more ecstatic side to her. She always tries to make a situation more fun and claims that smart people can have fun too. However, she can get very irritated but not easily at least (though her name being spelled wrong is her biggest pet peeve). But, Galaxi tends to write out what's bothering her, so she doesn't bottle things up. Overall, she is a nice, caring but ecstatic person who has some tendencies to be left alone.

Born to an unusual family

Galaxi was born to a mom who has hydrokinesis and a dad who has cryokinesis. Galaxi wasn't an only child; she has an older brother named Space, who seems to strangely know electrokinesis. Their family had a history of strange, unusal powers so it was likely anyone would receive some kind of ability, usually from their parents.

Anyway, children are supposed to inherit one ability. Galaxi was lucky, as she inherited both powers from both parents. This obviously meant that Galaxi had a lot of training coming up.

Aside from her abilities, Galaxi was a pretty happy child. She was always eager to learn new things whereas her brother, not so much. Space did impact influence on her, making her the fun, dare devil she is with friends. But Space was a terrible role model for Galaxi, trying to make her get in trouble which resulted him instead to receive the punishment.

Growing up, Galaxi was made fun of. She was constantly pestered as "Geek" for her smartness and was also pestered for her lack of control of her abilites. Being the intelligent person she is, she learned how to control not only her abilites but her emotions as well.

Overall Galaxi had an okay childhood.

When Galaxi turned 14, she learned her brother's true colors. Space was actually downright evil from the start, as the legend says that children not inheriting their parents abilities may not be good right away. But Space was a true master mind, trying to form Galaxi into a villian as well. Luckily, Galaxi did not fall for his trap, but now, she's trying to find her brother so she can stop him from becoming the next Dr. Eggman pretty much.

Galaxi only has two abilities, but she sometimes classify them as one since they're almost alike. Her first ability is hydrokinesis, in which she is able to influence, control, and even create the motion of groups of atoms in their liquid state. Her other ability is cryokinesis, in which she is able to slow down the movement of particles/atoms in matter to alter temperature, possibly to the point of freezing an object completely. Galaxi inherited those abilites from her mother (who had hydrokinesis) and her father (who had cryokinesis). When she was 6, she could not learn how to control them. But with enough training, at the age of 10, she finally learned how to use them properly.

Galaxi is also an excellent fighter, but still needs some improvement. In Galaxi's free time, she loves to read and write and is an excellent poet as well. She does have a smart mind as well, knowing right and wrong and doing the right thing. She has a rather active mind, and she often advocates for her beliefs. Because she is a rabbit, she is able to run fast but not as fast as Sonic though.

Galaxi cannot stand loud noises as they distract her from her concentration. She also has good vision but is nearsighted, so she has to wear contacts, but she will wear glasses too.

Galaxi has one super form simply called Super Galaxi. In her super form, her hydrokinesis is more advanced to where she can control water from the ocean (as she can only control lakes and ponds regularly). She gains pyrokinesis, but she has yet to control it. Also, her vision is more enhanced.

In this form, her colors are more of warm colors (red, orange) with some green in it. Galaxi's hair is also flowing more freely.

Her super form
Add a photo to this gallery

Made on Sonic Charrie Maker
Add a photo to this gallery
Retrieved from "https://sonicfanon.fandom.com/wiki/Galaxi_the_Rabbit?oldid=1853715"
Community content is available under CC-BY-SA unless otherwise noted.