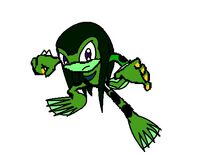 Funky the Sea Echidna is Funky the Echidna's piscine or amphibian form (in Native Gaian refered to as a Tachimaris) in the Funky Town Series. The transformation occurs whenever Funky comes in contact with water from a body of water, like a lake, a pond, or the ocean. The transformation remains until the crescent on his chest glows once he's totally dry. He's still Funky Jamaica deep down, and his new form serves as both a help and a hindrance in new powers and abilities. He still provides guitar and back-up vocals for the Funky Town Gang, and maintains his role as the Strength of the Gang.

Funky goes through an extreme makeover when he transforms. His fur disappears, revealing green skin with black spots that is permeable to water. His dreadlocks are replaced with long black tentacles that can move about randomly, and his crescent turns teal. His eyes stay purple, but have large pupils meant to resemble actual frog eyes. He keeps the bone protrusions in his knuckles, but his hands are webbed and have sticky orange tips for climbing walls. His toes are really long and thin and webbed, resembling actual frog feet. His tail also turns into a rudder or a fin, making it resemble the tail of a tadpole. He only wears his black swimming trunks, as his skin secretes mucus to keep him moist until he totally dries out. His teeth also turn sharp and pointy like shark teeth, and his nose disappears into small nostrils that open and close on their own to let air in.

In this form, Funky lives to his title of being a 'Son of the Sea', for he is of a race of sea creatures known as Tachimaris (literally meaning 'echidna of the sea'). Funky still retains his personality, but feels outcast for the fear of being called a "freak of nature". He also gains frog-like behaviors such as croaking, hopping, and puffing his chest out.

Unlike his typically calm and easy going attitude in his Echidna form, he is more aggressive during combat and would easily resort to fighting in certain situations. He particularly gets more aggressive when his friends (especially Zulily) are threatened.

It was after he found out that his mother was a Tachimaris from an underwater city near Jamaraya, and that he is the last Tachimaris alive. This made him accept who he truly is.

Some time before he left Jamaraya, Funky was walking along a beach when something cought his eye. He discovered a sea-shell comb that belonged to an old woman. Accusing Funky of being a thief, the old woman was actually a witch, and cast a spell on Funky. This first turned him into the Amphibian Echidna. He kept it a secret until he discovers Cooler's Werehog transformation, and that Becky is a Skyhog. He joined them in their patrols of the night against crime.

Funky gains superhuman strength, speed, and agility in this transformation, since he needs strong limbs for swimming. He is able to swim up currents and lift up boulders with little to no trouble. Funky also gains new Aquakinetic powers that he uses to his advantage. In the form, Funky's close range Attack is mainly Poison Dart Punch or Aqua Combat, since he uses his fists for close combat. He is also able to use his tongue and tentacles as whips for combat. He also uses the attack Hydro Pump as his most powerful attack.

As a frog-like creature, Funky gains Amphibian attributes and skills, such as being able to jump really high thanks to his strong legs, extreme flexibility, a long, sticky tongue to grab ledges and poles, sticky finger tips for climbing walls, and enhanced swimming. His tentacles act as extra limbs for different things and his teeth are sharp enough to bite through metal. the spikes in his knuckles now have a poisonous punch to them to give him an edge in fighting.

Retrieved from "https://sonicfanon.fandom.com/wiki/Funky_the_Sea_Echidna?oldid=1679153"
Community content is available under CC-BY-SA unless otherwise noted.