"Picture your life as an ocean.  The waves rise and fall with the tide of time, and crash onto the sands of a nearby beach.  That beach is you.  Whatever washes up on shore, you just have to embrace it.  There are times when something ugly comes your way, like a used can someone dumped onto your beach.  While most times, something great washes up on shore, like a valuable sea shell.  I live for those sweet moments in life on a boat that carries me across the waves of time, and takes me wherever the wind goes." -Funky the Echidna

Funky The Echidna is an anthropomorphic Jamaican Echidna, and third member of the Funky Town Gang.  While 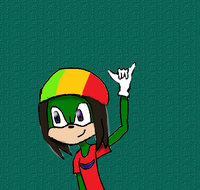 generally pretty moody, he's actually layed back and more open to the world.  He is the Strength and a Guitarist of the Funky Town Gang.

Unlike Mobian Echidnas who are mostly Red, Orange, or Purple, Funky is green with black dreadlocks, and a purple crescent on his chest. He wears a Green, Yellow, and Red striped Rastacap, and his attire consists of a red t-shirt with a purple crescent, light blue jeans, and green, red, and yellow shoes with purple socks. His muzzle is most of the time peach, but is often colored dark skin-tone.

As Becky is a Daughter of the Dragon, Funky is a Son of the Sea.  Funky is a layed back echidna who enjoys life and the way it turns "like the ocean waves rising and falling with the tides of time."  He's also very friendly, and easy to make friends with.  However, he is pretty moody, so when he gets mad, he tends to be short-tempered.

He is generally described as a 'family man' or 'big brother' to his friends, as he greatly cares for them and their well being, and hates seeing them in pain, sick, or at a loss.

He tends to get uncomfortable around women who stare at him with creepy faces, leaving him in a cold sweat.

He's the main guitarist as well as a back-up vocalist for the Funky Town Gang. He even provides main vocals for some personally selected songs.

Born to General Edward Carlos Jamaica, Funky started out as a typical boy with a great love for reggae and funk music. His mother died shortly after his sister Charlotte was born, and he was sent to live with his maternal uncle, Oscar Sheldon. His favorite singer and greatest inspiration was Bob Marley, and he decided to learn guitar and vocal lessons from his layed back uncle. His uncle gave him the nickname "Funky" for his love of music. Edward was mostly away on army missions, so Funky hardly had any contact with his father.

Funky was 9 years old and summer vacation just began when he came home to find Oscar in the living room, crying over the phone. Oscar explained to Funky that he developed pancreatic cancer, and he has to relocate to the neighboring island of Togerra. Funky, shocked and scared for his uncle's life, decided to go with him to help him through his cancer, and to become the man his father expects him to be. Soon after Summer vacation, Funky was 10 years old and said goodbye to Charlotte and all his friends and left for Togerra with Oscar.

A New life on Togerra

Funky and Oscar moved into the city of Littleburgh, where the Togerra Cancer Research Center was located. Oscar began his treatment while Funky went to school at Togerra Elementary. Funky didn't expect to make fast friends or being liked by his teachers, but he was very popular with the schools he went to, and made best friends with Cooler Jackson, & Conner and Honey Flame. Funky occasionally wrote to Charlotte about what's been going on and how things were doing, but he sometimes wished to visit his home.

Funky was 13 years old, one night while swimming in the center's swimming pool. Funky was just closing the pool down when an old woman peered behind him. Thinking she was lost or confused, Funky offered to help her, but she insulted him by saying that he was a pet to the center. Funky, getting angry and still wet, showed the woman to the door, but she was a witch, and cast a spell on Funky before leaving. Funky didn't know what happened before she left, but as he reached down to his keys, he saw that his hand was different. Staring at his reflection on the water, he realized that he was totally different! He had no fur, but light green, flexible skin that secreted mucus, his hands and feet were webbed, with his feet having really long toes like flippers, and orange, sticky fingertips, and his dreadlocks were replaced by blackish tentacles; he had transformed into an Amphibious Echidna creature.

Funky doesn't really have any powers, but he can feel waves from the sea with his feet, giving him an advantage to planning strategies to attack his foes.  This proves that he is also very clever and sneaky.

He also uses energy from his own aura by using the Maximum Heat Knuckles Attack when he wears yellow fighting gloves.  Due to him being an echidna, he has great strength to lift up boulders.

When he comes in contact with a body of water, Funky transforms into his Tachimaris Form; an amphibbean/marine creature believed to be a child of the Mistress of Frogs and the first Sea King.

Besides his strength, he took a course in boxing and martial arts, and earned black belts in the arts to relief his stress.

Although most of the time he is level-headed, he gets awkward around girls that tend to stare at him or give him creepy looks.  He also suffers from extreme herpophobia (feat of snakes), due to his Aunt Anna's obsession with snakes and their eating habits. He tends to lose his self-confidence, and he needs to get away.  He would first start with running away, but if that doesn't work, he often loses it, and starts to fight.

Cancer runs in his family, so there is an extremely high chance that he might develop a type soon.

Retrieved from "https://sonicfanon.fandom.com/wiki/Funky_the_Echidna?oldid=1824525"
Community content is available under CC-BY-SA unless otherwise noted.