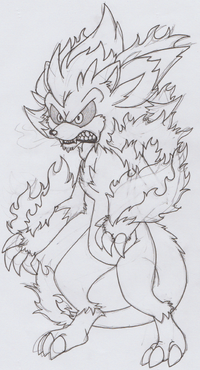 Fuego is an Inferno Creeperhog (Advanced Fire Creeperhog) created by Bubonic the Hedgehog.

Standing nearly 6 feet tall on his hind legs, Fuego is larger and more stylized-looking than the Fire Creeperhogs. His upper back, shoulders, forearms and the tip of his somewhat long and thick tail are shrouded in fire; fire also mixes in with his wild-looking quills.

His fur is primarily Huawei red in color, with a kumquat muzzle, chest, and stomach; his forearms, lower legs, and quill-tips are also kumquat in color. His eyes are metallic yellow in color with black scleras, and his claw-like fingers and toes are black in color.

Fuego was created during the events of Attack of the Creeperhogs. His violent tendencies made it difficult for Bubonic to keep him around the lab, and so he eventually decided to drop the Inferno Creeperhog off in the Scorching Plains, outfitted with a transmitter so the Troll scientist could keep tabs on his location.

It wasn't long before Fuego took a small area of the Red Valley as his territory, driving away anyone who dared to come near his new home. The Fire Clan of Fiamme was unsure what to make of him, but given his violent behavior, felt it was best to leave him be; his chosen stomping grounds weren't part of Fire Clan territory anyways. However, it is known that he has given Alistair the Porcupine and his Egg Soldiers stationed at the nearby Crimson Citadel Egg Base a difficult time.

Fuego's fighting style matches his personality; savage and without much grace. He fights ferociously with claws and teeth, using his sheer brutality to try and simply overwhelm his opponents. He is quite fast on his feet, and can run up to 50 mph on all fours.

Being an Advanced Fire Creeperhog, Fuego is, of course, armed with the ability to use pyrokinesis, and at a much higher level than his weaker brethren. Apart from being able to spew fire from his mouth, he can shroud his limbs and fangs in fire, enhancing his melee attacks. He can also shroud his entire body in fire and simply charge at his foe, slamming into them with his body for a powerful (if easily telegraphed) attack.

Fuego is resistant to the Element of Nature, and immune to the Element of Fire. He can also absorb Fire-element attacks and become stronger, up to a certain point. His flames become white-blue when he's reached his limit of fire-absorption.

Fuego is weak to the Elements of Water, Earth and Ice. His tendency to fight without concern for his well-being (or for much else) often leaves him open to coordinated sneak attacks, and he very rarely bothers to dodge any attacks coming his way. His defenses, while not terrible, don't do him any favors when it comes to his lack of self-preservation.

Fuego is quite possibly the most violent of all the Advanced Creeperhogs. His temper is frightfully short; even Bubonic has a hard time controlling him.

In an effort to keep him from destroying any Troll property (be it by accident or in a fit of violent rage), Bubonic allows him to run wild in the Scorching Plains. He's already claimed a small area of the Red Valley as his own territory.

Retrieved from "https://sonicfanon.fandom.com/wiki/Fuego_the_Inferno_Creeperhog?oldid=1833321"
Community content is available under CC-BY-SA unless otherwise noted.