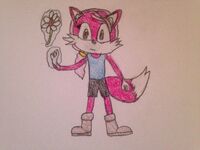 As long as everyone is OK, I'm OK.

Fuchsia the Fox is a fan-made character by the user Order. She looks like a simple fox, one of Order's favorite animals, and was created for the sole purpose of simply having an OC. She lacks physical abilities, but makes up for that in her powers and abilities.

Fuchsia was based on the fact I wanted an OC for Sonic stuff I wanted to do. I must give credit to User:Mystic Monkey because he gave the suggestion for Fuchsia's name and in turn, her base color. I wanted Fuchsia to be similar to me in personality, but still be able to stand on her own and be her own animal. Her clothes were from an old roleplay character I had once created on the Spirit Animals Message Board, but never got to use so I changed the colors and put them on her.

The idea for using a fox is because it is simply my favorite animal. I also didn't see many foxes in Sonic games aside from Tails. I used bits of Tails, Fiona Fox, and Zooey to get a feel for how she should look, but didn't make her a mix and match copy and paste kind of OC. I also got her powers from the fact I am crazy for magic, and she isn't going to be a discount Merlina or anything.

Fuchsia comes from a destroyed future. When her world, which is from an alternate timeline than Silver's destroyed future, was ruined, she had been a child and now doesn't remember who had taken care of her or where they went. She spent a large portion of her life simply trying to find food and a safe place to stay. She only learned about her powers when she was nearly crushed by a falling building and accidentally used psychokinesis to fling a stray board away.

When she's 13, Fuchsia finds a stray power ring in an abandoned warehouse while exploring. She manages to get it to grow and shrink to her will after a month of practice. She uses it as a ponytail band as she honestly has no idea what it can really do. A few days later, she goes back to the warehouse and finds a slightly burned piece of paper. Having bent well educated in her past, she is able to read it.

The paper tells Fuchsia about Sonic the Hedgehog, mentioning many great deeds. Fuchsia instantly idolizes the hedgehog as she has never heard about someone doing such amazing things. She takes the paper and spends about a year trying to find some way to meet him. She activates a time portal accidentally by gripping the ring and thinking intensely about the past. Desperate to escape her lonely and ruined world, Fuchsia takes her paper and runs through the portal.

Fuchsia arrives near a busy city. She spends about a day or two not going near public places as she is overwhelmed by the life and vibrancy of the past. Eventually, she finds a library where she reads about Sonic and about how the world works. After two weeks, Fuchsia decides she's ready to try and find her hero. Knowing the relative position of his most frequent sightings, she finds Sonic with relative ease.

Fuchsia is able to make friends with Sonic after helping him multiple times when she can. She also went to be friends with some of Sonic's other friends, as she knew about them. After two months, she's a good friend to Sonic's group of friends. She goes on few adventures alone, and usually gets one of her friends to join her. She still struggles with understanding everything, her own abilities, and the threat of exposing herself as a being from the future.

Fuchsia the Fox has not appeared in any fan games nor comics. She had appeared in one, but it was scrapped and abandoned.

Since Fuchsia is a fan-made character, only her creator has the rights to voice her.

Fuchsia is kind and caring to a fault. She trusts in her friends and is loyal to them. Having grown up knowing only two people she was always around, Fuchsia developed a need to be with friends and trusted everybody she met, never having met an untrustworthy person before. She is intelligent, though not tech-savvy like others. She is honest normally, and is uncomfortable with lying. She, however, is not afraid of keeping her secret she's from the future. She has a magnetic personality, allowing her to make friends easily.

She does not have much of a strong opinion about anything, and making choices tears her up. She prefers doing what others tell her instead of telling them what to do, but she can set off on her own to do what she thinks is right. She is very free-spirited and much like a young child, often cracking jokes and being sarcastic. She does have a serious side, but it rarely shows. She would give anything to save her friends, including her own life.

If given a choice she must make, it would take a long time before she came to a choice and in the end, she'd be doubting it the entire time. She wants to help people and is completely heartbroken when she fails. She enjoys going fast and being free, and hates being stuck in one place. She is not very mature, claiming that she had to grow up too fast, decided it was boring, and gave up doing that.

Due to her time in a destroyed and doomed future, Fuchsia does have inner hatred. She can't seem to shake it off, no matter what she tries. She's a lot darker than she seems, enjoying intense and edgy moments, though on the outside she acts normal. There is a part of her that gravitates toward evil, but she feels like she can ignore it.

Her most often used item. She uses it as a ponytail band most of the time, but she can also shrink and enlarge it to make the structure for a portal. Also, due to it's strength and healing properties, she will take it off in times of need to give her a needed boost.

With the help of Tails, Fuchsia built her own board for racing with. She isn't the best on it when slow, so she only uses it for fun. This is a very rare thing for her to do, as she hates falling off it.

Fuchsia is fast for a fox, and is more built to be a sprinter than anything. She can outrun many normal animals, though she's not even half as fast as Sonic.

Due to her innocent-like appearance and quick thinking, Fuchsia is able to talk her way out of many problems, though it doesn't work with people who already know her well.

Telekenesis is an ability Fuchsia has had since birth. She has very little educated training, so she can loose control if she is not careful.

Chaos Control, the ability to use chaos energy, is one of the abilities Fuchsia has that she doesn't use all that much, but it comes in handy.

Immunity from forgetting history was a given ability thanks to her own time-traveling powers.

Her undying faith in her hero: Sonic the Hedgehog, her psychic abilities, Chaos Control, speed, and her ability to make lots of friends. She doesn't try to infuriate people, and can calm situations down. She has loyal friends and knows how to fight with her hands if needed.

Fuchsia cannot make up her mind, at all. She's a follower, not a leader. She wont leave her friends to die and sometimes acts without thinking. She's very jumpy and easily startled. She's also a bit of a crybaby. She thinks too much on the negative to see the good in life sometimes. She lacks physical strength, and has no idea how to climb a tree or ride a bike. She has low tolerance for pain, and she has deep anger for how her world is that she can't shake. She can sometimes give up a bit too easily. She is easily manipulated and tricked if you make her doubt herself. She is also nervous talking to new people.

Having never known her parents, Fuchsia assumes they are dead and feels no connection to them.

Traveling around the world with Sonic and friends, Fuchsia has meet many people along the way, which she's always befriended.

— Fuchsia the Fox to Sonic the Hedgehog

Fuchsia has an odd relationship with the blue hedgehog. They are indeed great friends, and Fuchsia views Sonic as her hero, things are a bit more complicated. While the fox's interest in Sonic could take a romantic turn, she does not want that and she doesn't think love is important enough, so no. Fuchsia would gladly take blows for Sonic, but not a fatal one, as she needs to be alive to go back in time and save him. She plans to fully abuse her time traveling powers to save Sonic and her friends forever, no matter what.

Fuchsia used to have a theme song, but it is being changed.

Retrieved from "https://sonicfanon.fandom.com/wiki/Fuchsia_the_Fox?oldid=1799674"
Community content is available under CC-BY-SA unless otherwise noted.