This page is about the fan character by NudgeHipsterLopunny.

Fushria "Fuchsia" Zephra (フシア・ザ・化け猫) is a 12-year-old anthropomorphic bakeneko and a 99% angel. She is the main protagonist of Sonic Angels. She is also the former fursona of User:NudgeHipsterLopunny. Her character is based on Raf from Angel's Friends, but was modeled after another one of my other original characters. She has pink fur, a bushy tail (which is actual two tails merged together), a yellow halo, and blue wings. She has the shortest temper and foulest mouth in the series. Despite her age, she still has childish interests.

Before Fuchsia was born, her parents, Tsubasa and Hikari, were the king and queen of Hitama kingdom. They had a beautiful young daughter named Blaze. Hikari always kept a secret from Tsubasa, that she was an angel, this made Tsubasa suspicious and led to him constantly accusing her of sleeping with other men, she told him she wasn't, so he kept a close eye on her. They had very bad trust issues and thus began to fight and argue, and it only got worse as time went on. Two years later, when Hikari gave birth to Fuchsia, Tsubasa denied that she was his child, so he demanded that she be given away, when she refused, he attacked her. He then decided to divorce her and she left the kingdom with the newborn Fuchsia.

Twelve years later, Fuchsia was called to Earth to attend The Golden School to help her become a 100% Guardian Angel along with her best friend, Rimoka Midori. To do so, she was assigned a human being named Christina Burgundy, to watch over her and help her make the right choices. However, her task is pitted by a thirteen-year-old devil student named Hayate Kuroi, who is also assigned to watch over Christina, but to ensnare her, and tempt her onto the wrong path. While attending the school, she and Rika meet Blaze Hitama and Hanako Kiro, two older angels who they quickly become friends with. She also met Sonic and his friends on the job, and got along very well with them.

﻿Like the average house cat, Fuchsia is easily startled, distracted, and annoyed. And she loves catnip. She is also very sensitive to certain smells and sounds. She is also grossed out very easily. She can also be bribed very easily. When she is extremely tired or hungry she will become cranky and irritable. All of her attacks, except for her physical attacks, chaos abilities, and psychic abilities, are useless indoors or in outer space, however, her shooting star fly, shine fly can be used in space. When she goes "feral", she can easily be stopped by distracting her in any way.

Like all angels and devils, she attacks using her wings. Most of her abilities are weather based, however, like almost all of my personas, she has psychic abilities. She also learns Chaos Control later on in the series.

Fuchsia normally acts very kind and sweet; she is wild, playful, and energetic. She also loves play fighting. She has a short attention span and is very impatient.  She is also a chatterbox, and never shuts up. She also has very severe anger-management issues; when she gets angry enough, she will loose her whole mind and go ballistic. She has very low tolerance for rudeness and cruelty. She also has a very rough manner of speech in which she swears and threatens people a lot, she is NOT all talk. She also gets jealous very easily. She often develops strong bonds or attachments to inanimate objects such as, toys, dolls, etc. In fact, she talks to all of her dolls and plushies as if they were real people; however, this may or may not be because she is still just a child.

She loves to eat, a lot. When she sees someone she loves, she will instantly glomp them and start licking them while purring. On rare occasions, she will try to win a males trust over by flirting with them, but this usually fails, plus, she only does this when she really wants something from a guy. Other times she will beg by meowing and purring. Sometimes, when Fuchsia doesn't get what she wants, she will purposely fall onto the ground and start kicking and screaming like a baby, she only does this to Sonic and his friends though. Her personality can be easily compared to Ayumi Mamiya from Magikano, or Sugar from A Little Snow Fairy Sugar.

"Are you gonna eat that?"

"If you say 'that's what she said' one more time, I will castrate you with my bare hands!"

"Oooh, I love that show, its so cute, and funny, but its kinda perverted, like how they always show her naked and doing silly things, and he gets a nosebleed over it, and she doesn't know what she's doing 'cause she's like a baby, he's in love with her, but she's a robot and he's a human, and he's struggling through school, and..." -Fuchsia babbling on and on about anime. 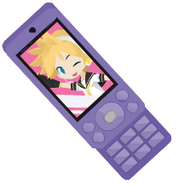