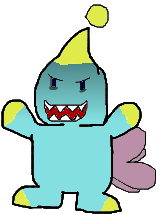 '' What do you think I am? A pet? A sidekick? NO! I am not stupid like the other members of my species. I am a free Chao, I do not serve anyone! You Mobians will be exterminated! GEEHEEEHEEEEHEEE!!! ''

Fubsy the Chao is a completely insane, psychotic and cruel Chao. He suffered a mutation that allowed him to speak. He hates the Chao being treated as pets, his biggest goal is to extinguish the Mobians and make the Chao the dominant species.

Fubsy only has empathy for his own kind and Chaos, the god of destruction. Besides, he doesn't care about anyone else.

==
Appearance == Fubsy is identical to any other Chao, the only difference is that his body has darker colors. Also, he always seems to be smiling, and has dark circles in his eyes.

Fubsy is aggressive, cold, racist and brutal with all Mobians, especially the Echidnas, which he considers the worst type of Mobian. He also proves to be insane as his biggest dream is to annihilate the Mobian species and replace them with the Chao. Even so, Fubsy is never considered a big threat by Sonic and his friends. Fubsy is also very sadistic, he always takes pleasure in hurting Mobians. Fubsy is bipolar, her temper ranges from calm to furious.

Fubsy was born like any other Chao, he always slept on top of the Master Emerald, which made him absorb extreme chaos energy levels. Despite gaining abnormal intelligence, strength, and endurance, the energy of chaos drove him insane.

As he grew older, Fubsy realized that his friends were adopted by various Mobians and treated as pets, which infuriated Fubsy.That same day, a fox girl tries to pet him, but he bites her and tells her to leave him alone, which made Fubsy hated by everyone who passed by Chao Garden.

With each passing day, Fubsy grew smarter and more powerful until he grew tired of seeing his people treated like that and began practicing terrorism in the villages near Chao Garden.

One day, villagers called Sonic the Hedgehog to end Fubsy's reign of terror, Sonic managed to drive Fubsy out of the village. It was the beginning of a long enmity...

Like any other Chao, Fubsy uses its wings to fly.

Thanks to the chaos energy, Fubsy has super strength and can lift up to 30 tons. He also has super resistence, and can handle several Knuckles punches without earning any scratches. Not to mention its super form, which triples its power.

Due to the high level of Chaos energy accumulated in your brain, Fubsy is completely insane, which can make him take hasty decisions and psychotic attacks.

Over the years, Fubsy began to develop an addiction to Chaos energy. If he goes too long without taking a dose, he will soon become increasingly violent until he becomes a completely wild and psychotic being.

Fubsy went so far as to consume Crystallized Chaos to quench his will, he only stopped when he discovered the drug's ingredients.

''Sometimes I stop and think to myself: Why do I hate Mobians so much? Then, I remember, if I don't eliminate them, they eliminate my species first.''.

''Mobius will burn, and like a phoenix will rise from the ashes, this new Mobius will have no Mobians, it will have Chao''.

''Your race disgusts me, it destroys forests, kills animals and disrespects itself, I will do the gods a favor by eliminating you''.

''You mean I look cute? Be careful, boy, appearances can be deceiving''.

''I hope you enjoy dancing, hedgehog, because today, you will DANCE IN THE HELL!''.

Fubsy and his addiction to Chaos energy.

Retrieved from "https://sonicfanon.fandom.com/wiki/Fubsy_the_Chao?oldid=1860248"
Community content is available under CC-BY-SA unless otherwise noted.