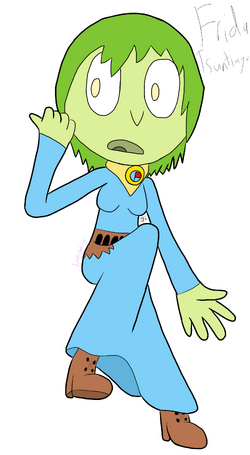 During her childhood, Frida had lived in a poor area under strong oppression. She was unable to do many things simply due to her gender and social position, being the daughter of a freeter and a maid. She and her brother Antonio were often bullied simply because of this, where Frida would usually attempt to fight back, with Antonio restricting her, trying to convince her that it's not worth the trouble. Up until her teenage years, she kept these feelings of anger and spite hidden to prevent any unfortunate events from occurring, and had lived the same daily routine over and over again. As soon as she had turned 16, Frida decided that she had had enough.

She began to secretly form a group, with Antonio's assistance, of revolutionaries from all backgrounds, races, etc. all hoping for equality. This bit was unknown to Antonio, who simply thought they were friends of hers. She would also become a temporary maid and would relay information of what she had seen back to her comrades. Once enough people and information were gathered, the whole group marched to town square, where Frida was supposed to be the one to fire the first shot, which would have started the war. However, her shot missed it's mark due to her near-sightedness (which she just hoped wouldn't matter at the time,) but the war started anyway. Before she could be injured, Frida was pulled out by Antonio, and the two decided to pack up what they could and just run as far away as possible in the case that they would be hunted down.

After a long time of running from their past, both Frida and Antonio had boarded a train, on which they had met Jared. He had heard of their story around when it first happened, as a few members of EQuartz were part of the revoution, and had given them a job offer. At first, Frida was reluctant to sign, as she thought that this might make them get discovered by those who they had revolted against, though Antonio had reassured her that it would be safe, and she agreed to the contract.

Since then, both Frida and Antonio serve EQuartz, now both partnered together and tasked with hunting rare species of creatures throughout the world to study and preserve. They might not have the highest success rate (capture ratio of 34.5%) but they attend to this job with quite the admirable gusto. While doing so, Frida has begun to write down information she can get about the many weird and suspicious machines that she sees being transported away, and has done so for the last 2-3 years.

Events of the EQuartz Committee: Season 1

Being a humanoid plant, Frida does not have many powers. Her weapons of choice are her lucky revolver, which she had her name carved on the side of it in a neat font, and a secondary pistol, though misses almost all of her shots due to being very near-sighted. She can also shoot out her needles in a wave by twirling around fast enough. It's been shown that when she suffers from confusion or severe dizziness, her accuracy with her revolver actually increases. If combined with Jared through use of fusion, Frida can upgrade her revolver to fire special bullets that sprout large ice crystals upon collision, allowing for effective stalling against the enemy to compensate for poor aim.

Along with all of these, Frida becomes a basic-level boxer mid-way during the second season of the EQuartz Committee. As she progresses through the show, she developed suprisingly well given her physique and lack of prior experience. She has since learned an amazingly wide variety of punches, uppercuts, jabs, and ways to psyche out and counter an opponent. Also from this experience, Frida learned to more closely observe her opponents, allowing her to develop strategies based on one's personality, powers, and movement-patterns.

Frida is a hopeless romantic, often hitting on anybody of the opposite gender and challenging other females to overly-dramatic gunfights. Despite being a revolutionary, Frida can be seen as somewhat of a coward, running away in fear from any challenge she sees as too difficult, yet will still play up the act to try intimidating foes, and seems to work best when she can't be seen, as seen when she secretly notes down the many different machines she sees being secretly stored underneath EQuartz. She is also a bit impulsive, often jumping into things without realizing the weight of her actions.

Frida, has yellow-green skin, dark green hair/gloves/cheeks, yellow eyes and is about 3'6". Her hair has a loose style and a darker shade of green compared to her skin, with a long ponytail on the back of her head that also has a budding flower at the end. She wears a plain blue dress with large shoulder puffs and a brown bullet-holster around the middle to act as a belt, an orange bandana around her neck (which also carries her emblem) and sometimes wears a yellowish-white sunhat to shield her eyes from the bright rays, which then covers her feace with a layer of shadow.

Frida 2016
Add a photo to this gallery

Retrieved from "https://sonicfanon.fandom.com/wiki/Frida_Tsuntiago?oldid=1693518"
Community content is available under CC-BY-SA unless otherwise noted.