Fresia is an enormous, lush planet with huge mountain valleys, vast jungles, and sprawling grass plains. that was colonized centuries ago by a group of Anamist mobians called The Skitari, and later by large groups of mobians desperate to escape the reign of Doctor Robotnik. A few years later the Seedrians invaded and gained control of the world and its native people. Since then the previously un inhabited world has become home to millions of Seedrians and and native Fresians. For a reason that remains unknown Fresia seems not to adhere to the dimensional rules and exists in all of them but is the same in every different zone. For example the Anti- Verse Priam the hedgehog is exactly the same as the normal zone version of Priam in ways of personality, though they may lead slightly different lives. The only know exeption to this is the normal zone version of Maric, Ciram Reivaz. It is believed that this is because Ciram was born on Mobius rather than Fresia.

Long before doctor robotnik or any of the turmoil on mobius a group of several thousand Mobians headed out to the stars in search of a new home where they could live in harmony with nature and the universe, which was almost impossible to do on their home world thanks to the overlanders. After an estimated two years of aimless wandering the colonists found a jungle planet with a habitable atmosphere and abundant resources, they decided upon landing to name tis planet Fresia or Freezia meaning, "the land of endless rains" in reference to the fact that almost anywhere on Fresia it rains at least every afternoon. The colonists themselves took on the name Skitari or "Followers of Skitar" who was their original leader and sadly never lived to see Fresia's discovery. They formed a culture of simple living and intimacy with nature similar to the Cossacks or Native Americans. They followed The Teachings of Skitar and lived alone peacefully until more settlers arrived from Mobius years later to escape doctor robotnik on their home world. Following their beliefs in equality and acceptance the Skitari welcomed these people with open arms and gave them land to live on. They eventually built cities and created their own civilizations such as Ahiman, Vipax, and Kaiserburg. It is widely believed that around this time The Order of the Incubi was put on the warpath for the first time in centuries to protect the world from doctor robotnik should he decide to invade, luckily for the Fresians however Robotnik didn't even know Fresia existed right up to the moment he died.

A few years after the defeat of doctor robotnik on Mobius the Seedrian empire was at its height. By chance a seedrian scout ship discovered the jungle planet and reported it to the high council which then sent a colony ship to claim the planet for the Seedrians. Relations between the natives and the seedrians started off bad when, in an act of sheer negligence, the ship never bothered to coast the area for signs of intelligent life and landed in a jungle clearing less then six miles from a Skitari village. The Seedrians (Who still had no idea the planet was inhabited) disembarked and began to take in the beauty of their new home. But before they could get comfortable a group of Skitari hunters happened by and opened fire on the ship with their bolt-action rifles (The weapon of choice for most Skitari) scattering the colonists and initiating a fierce standoff between the colonists and the Skitari of the nearby village. Soon more ships arived and made contact with the original colonists who told them the whole story. This was used by the Seedrian minister of war Lucius to justify a military invasion of the planet despite protests from the council leader Hertia. This started what came to be known as the Skitari independence war being as they were the main faction to resist the arrival of the seedrians. The Incubi were also involved in this war and it was here that they truly became feared and respected as legendary warriors. The Skitari Independence war ended in a draw, the skitari and incubi kept control of their homelands and the Seedrians took everything else.

Almost immediately after the Skitari war ended the seedrian empire abroad began to decline. In a war with a mysterious enemy the seedrian colonials naturally decided to draft fresians into service and use them in their army. This was perhaps the worst mistake the Seedrians had made up to this point. The first fresian civil war began after a large group of conscripts were sent off to war and almost all of them were killed the ones who returned pleaded with their comrades to mutiny and refuse to go fight, and they did. In an attempt to regain control the Seedrians tried to use their own troops to subdue the rebellious soldiers and send them to fight. this plan to round up the soldiers to send them back out was called operation retribution. Operation Retribution began in Kaiserburg (The capital city) with the seedrians going house to house and trying to force the fresians into trucks to take them to the barracks. This soon started a riot that then turned into an all out uprising. Cities all across fresia had the same reaction to operation retribution and soon all of the colonial military's strength was focused on restoring order. By the time the disorganized rebellion was put down the war had ended with the destruction of the Seedrian empire. With their home world destroyed the seedrians took complete control of fresia and set up an independent government based on that of the former empire. Meanwhile the native fresians suffered loss of rights and freedoms and were severely segregated against by their seedrian rulers. Aside from a few skirmishes here and there with rebel gangs and Skitari outcasts no serious rebel activity occurred on fresia until, at about the same time sonic and his friends were battling dark oak, The Ahriman Uprising happened in which the seedrians were reminded of the determination of the fresian people to be free. 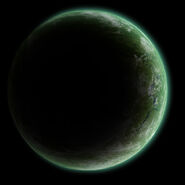 Fresia's vast plains. Most of these are inhabited by the Skitari

The legendary Incubi/Fresian war. The burning planet is Ogma, and the one in the background is Ajaxis. Both were bases of the Incubi, Ogma was left unihabitable and Ajaxis was completely destroyed.

Add a photo to this gallery
Retrieved from "https://sonicfanon.fandom.com/wiki/Fresia?oldid=1364717"
Community content is available under CC-BY-SA unless otherwise noted.