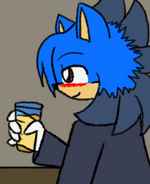 living in the wilderness, Music, traveling around the world,

being sarcastic and manipulative, mature and immature people,

when it is Dawn or Dusk
Dislikes
Most sweet foods, loud noises and places, demons,
spirits or ghosts sometimes, and arrogance
Skills and Abilities
Special Abilities
Refer to the Abilities section below
Other Info
Created by
Xx-PublicEnemy01-xX

Frezisius "Aedan" Aerion, known mostly by his nickname of Freeze, is an infamous 24 year old alien morphed hedgehog, who is currently a wanted convict. He is the younger brother of Flare, older brother to Sophitia and child of Novisius Aerion and Rubecca de Abbecia. He came from a planet named Krystilonia, meaning in his people's native tongue " The Sun hidden within the Shadows ". After events occurred on his home planet that would endanger his family's life, Freeze and his siblings were sent off to Mobius in hope of refuge. Even though he is an infamously wanted criminal by G.U.N. , Freeze continues to travel across the world freely, often visiting places such as Station Square, Soleanna, Central City, South Island, etc. Early in his life on Mobius, he had met and later married a sweet girl named Lana Garcia, with whom he had three children with her. Layla being his eldest child, Furea being the middle child, and Leslie being his last child. Later on in his life, he also adopted another child, Anise.

Freeze currently resides within the deep end of Soleanna's large tropical forest, where his built estate secretly keeps itself hidden from society. He marks certain objects in this forest to help navigate himself and others in and out of the forest and back into the outskirts of Soleanna. Freeze inherited money from a friend after this same friend burned his home on the beach to ashes. He planned to use the money to build a new home, but something else later occurred. This same friend died soon later ( No, Freeze did not kill him. ) and gave his business over to Freeze, in which Freeze managed to become a popular hotel business renamed " Chilly Palaces " and made him rich. He used his said riches and inherited money to build his current estate near a river and built a watermill and solar panels for his house to run on hydroelectric and solar energy, because of Freeze's fond love for wilderness and Earth's " unevolved " ancestors. Another reason why he lives deep in the woods is because of his current status.

Freeze had been an expert street brawler, usually getting into multiple bar fights while out drinking and brawls with friends and foes. Due to this, Freeze grew fond of fighting and decided, while living in his new home, he should do something other than running his business to pass a bit of time. He joined up with an illegal underground fighting establishment and, sooner or later, became a manager for it. Authorities then found out about the establishment and Freeze got arrested for association of an illegal business and had been sentenced to the slammer for 10 years. He lost his company, which turned over to his second in charge and spent 3 to 4 years within prison before busting out because of sheer boredom and longing for his family and friends. To his dismay, his family now disliked him and his friends hadn't even known of his "departure" to prison. He and his wife, Lana Garcia, went through a divorce soon after he busted out of prison and took care of their three children, Layla Garcia, Furea Aerion, and Leslie Garcia-Aerion.

Freeze's morals are usually hated by others because of his " Logic over everything, and Survival is key " sort of attitude. He's usually a friendly guy to most people, but isn't exactly the type of person who'd help others unless benefiting from such. Whether it be reputation, psychological dominance, or just money that he can obtain, he would help out but depending on the situation. ( EX: If it came down to hurting another to gain his family's trust back, unless it be friends and/or family itself, he would be happy to oblige. If it came down to hurting another to earn reputation within a certain group to be accepted, he wouldn't really do so unless he'd REALLY benefit from him. )

After becoming rich through his Chilly Palaces business and not having to really worry about money to get the things that he needed such as food, clothes and a home, he stopped thinking about the economy. He would want to be able to help do something about it, but it would seem that everything about economics is under a bit of control. Freeze also never really paid much attention to politics, thinking that it only corrupts people and causes more problems for every other aspect( Economics, Rights, Laws ).

Freeze is a rather tall Mobian hedgehog ( Probably 4'6"; Based around Archie Comics' height and weight system ), mainly because of his mutated blood and Krystilonian genes. ( His original species; Will be explained here later. ) His fur is a light navy blue and blood red eyes due to Krystilonian demon blood and genes. His quills are wild-like, more porcupine than hedgehog, and are dyed a dark navy blue at the very tips. His skin tone is a light tan and his ears are slightly pointed. Freeze usually wears shirts that are ripped or none at all, any type of jacket over it, pant w/highlights at the bottom of them and small shoes w/ a different colored sole and/or with designs. He sometimes wears gloves and things around his wrists. Unlike most Mobians, Freeze's wardrobe is large and he loves to switch up his clothes once in a while.

Freeze's appearance has changed, dramatically, from his original design in November of 2009. He has gone through 7 revamps and has 6 versions.

His first version's design has been lost and I can not say what he looked like.

His second version was a slightly lighter navy blue with only three quills that had red long stripes down them, like shadow. His first quills was a short down pointed quill, his second a longer quill that was down pointed and his last quills was a slightly curved quills that pointed upward. He had a fringe that was completely red, and wore a terribly sprited black jumpsuit and matching finger less gloves. His shoes were Sonic's shoes. His skin tone had been darker, more of a " African American " tone and his eyes were a light sky blue color that changed to light red sometimes.

His third version appeared to be the same tone as his second version with only 5 quills that had white long stripes going up them. His first four quills are pointed upwards like spikes and his last laid flat. His skin tone stayed the same, but his eyes changed to red permanently. He has a slight scar over his eye and wears a white jacket, black shirt and pants with black and white shoes. His jacket has no sleeves and his shirt does. He wore no gloves.

Both versions 4 and 5 were either lost or deleted immediately after the next version came up.

Version 5.5 had been the fourth custom sprited version and best of them all. His quills are the same as he has them now, wild-like, more porcupine than hedgehog, but their tips had been a silvery white color instead of dyed a dark navy blue. His eyes had been a bit lighter but still a blood red color, skin color and pointed ears stayed the same too. He wore a white jacket, black shirt, black pants with yellow and white highlights on the bottom of them and navy blue shoes.

Freeze's name may be an odd one, though he is named after the ability " Chronokinesis " or the ability to manipulate time itself. This ability had, originally, been Freeze's initial special ability until later changed to something more unique. Due to the creator's fond of the ability, lack of name choice and already being known as such, Freeze remained to be his name. Later on though, it had been changed to a nickname after finding a better first name than just the average " Freeze "; becoming his first name now, Frezisius.

Retrieved from "https://sonicfanon.fandom.com/wiki/Freeze_A._Aerion?oldid=1834689"
Community content is available under CC-BY-SA unless otherwise noted.