I'm missing my stories for that quack?! 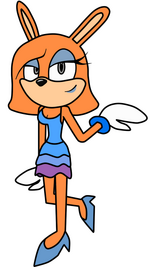 Freckles Jeeperchomp is an original, Princeton Orange, anthropomorphic rabbit created by Pumpituppartyzone. She is 97 cm tall and keeps her weight a secret. Her step-sister is D.W. the Rabbit, and she is the fly formation of Team Freckles. Her team consists of herself, D.W., and Ned McMuffin. Her "gang" consists of Pool Shark, Ned, Crush the Bandicoot, and herself.

Freckles Jeeperchomp was created in 2003. She is somewhat based off of a Toontown Online character design. This does not include her clothes, however. On Toontown, Freckles was originally very nice and loved helping people. Afterwards, she was deleted either because Pumpituppartyzone wanted to make a Toon named Amy Rose, or because Freckles got stuck in Donald's Dock and couldn't face the cogs. Freckles' reason for deletion is confused with Lily McFlip's. Soon after deletion, she started to be used as an evil character, though the reason is unknown. She became Maxie's biggest rival all around. She has also gone through many character designs.

Freckles does not usually like to help people at all. She likes to fend for herself, and make people do things for he. She is used to this because she lives in a castle. She suffers from major depression because she "has not friends," but she tries her best not to show it. She is great with disguises, mostly because of the makeup. She loves shopping just as much as Maxie does, which is one of the things they are rivals in. She is very competitive and vengeful, holding a grudge for a very long time. She wants everything to be about her, and gets mad when she isn't in the spotlight.

Freckles is a very strong fighter. She has the common abilities, Spin Jump and Spin Dash. She also has the jumping abilities, Bunny Hop, Spin Hop, Bunny Dash, Double Jump, and Triple Jump. She is a very high jumper, mostly because she is a rabbit. She also has an ability called Mystery Kiss. This could result in a variety of things, which may be why it is called the Mystery Kiss. This is a very powerful attack, and it is loosely based off of the Toontown Toon-Up gag, Lipstick. She is good at baseball, mostly pitching and hitting. Freckles is not very fast, though. She can also use her ears to achieve flight, much like Cream the Rabbit's.

Freckles is one of the team captains in the game, Baseball Party Zone. Her team name is "Freckles Slammers", her special throw is the "Lipstick Ball", and her special hit is the "Orient Swing". Her default stadium is "Freckles Castle", and her team consists of herself, Ned, D.W., Mercy, Bad Fairy, Crush, Big Buela, Pool Shark, and King Crab.

Everybody but Missy, Keygen, Bad Fairy and her friends

In the Roleplay:The Great Adventure, Freckles takes Desiree's purse while Bobby is still in it. Rapid gets so mad that he turns into Dark Rapid, punches Freckles in the face, and makes her eye bleed (although part of it was caused by Rail kicking her in the face). Freckles needed an eyepatch over her right eye for months, and it still bleeds whenever she cries.

Desiree the Bandicoot (to an extent)

Almost everybody she knows that isn't her friend

Freckles in her first ourfit (base used)

Freckles with a piece of the Master Emerald (base) 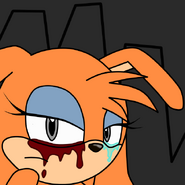 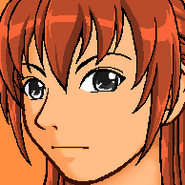 Freckles in anime. Made at http://foxrichards.devi

A comic of Freckles and Maxie fighting over an outfit

Freckles in Maxie Rivals
Add a photo to this gallery

"Ready to get your butt kicked?" - Before Race/Battle 2

"You're not giving up? You will soon." - Before Race/Battle 4

"I wasn't even trying." - After Losing Race/Battle 1

"Enjoy your win for now." - After Losing Race/Battle 2

"Oh yeah! I totally rule!" - After hitting a home run

Retrieved from "https://sonicfanon.fandom.com/wiki/Freckles_Jeeperchomp?oldid=1799913"
Community content is available under CC-BY-SA unless otherwise noted.