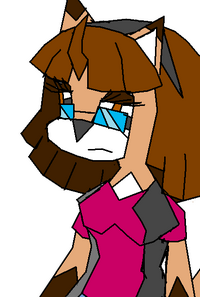 In Fox's early stages of life she used to be severely violent.Eventually her phases of violence subdued and she became quiet and shy.She usually doesn't come into contact with others that easily,but when she does either makes small squeaks and noises or talks in a soft voice.Despite Fox's shy behaviour she could be brave if she wanted to and is able to do what others would think is crazy.When she is in solitude she often thinks to herself and/or spends time work with technology.Fox sometimes can be paranoid,especially if the thing she's paranoid about contains death.

Fox was born to two Abyssinian Cats and is the oldest of three children.In Fox's early life she was constanly angry at everything,like other memebers in her family.Eventually it subdued when the second child,Fawks,was born.Unlike most of her family,Fox actually liked her new younger sibling.Her younger sibling was rash,but a little less than her parents their relatives.Fox's last sibling was born and he was the cruelest of the family and had the other two do his works and get him food.When Fox and Fawks wouldn't do anything he would scratch and bite their arms.All the biting and scratching would eventually ruin Fox's arms and she had to get fake arms.She had to learn how to use technology to control her arms and she eventually upgraded them with built-in chains.One day,Fox and her sister realized it was too hazardous to live in their enviorment.That night they packed up teir things and left.

The two met a group of wanderers named Team Fury.Fox seeks to find happiness by joining the team.

Fox really loves her younger sister and wants to protect her from the rest of her family as well as any other threat that comes their way.The two don't understand each they both have a mutual dislike of their family one way or another.Fox sometimes believes that Fawks drives people away from the two.

Fox is really close to Gustin in the group,due to Gustin being the oldest and Fox being the third oldest.Fox and Gustin share somethings in such as their tastes in music.Fox may have a crush on Gustin,but is waiting until she older to tell him.

Fox and Whirlwind consider each other friends.Both work with technology and machinery,even though what they work with is very different.Whirlwind will often ask Fox to help her with what she's working on and vice versa.

Fox and Lex don't talk or interact with each other that much.The two will still help each other if one is in danger.Fox is less shy around Lex than other people.

Fox and Pity treat each other as rivals,but a little bit friendlier.The two are close in age,despite that fact that Fox acts a little more mature than Pity.

"I guess I won...?"-Fox after winning a race or battle

"I could've done much better....."-Fox after losing a race or battle 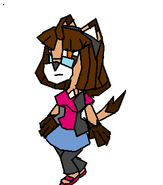 A chibi of Fox

Fox Redesign
Add a photo to this gallery

Retrieved from "https://sonicfanon.fandom.com/wiki/Fox_the_Cat?oldid=1555664"
Community content is available under CC-BY-SA unless otherwise noted.