Credit to my awesome friend for the art! :)

Fox the Brave, formerly known as Red the Fox, is a character in The Legend of Fox the Brave. He is the titular hero, the main protagonist for a few early stories, and the founder and first leader of the Storm Fighters. He is well-known for his incredibly short temper and hostile temperament, yet despite this, is well-respected by many, and listed as one of the greatest heroes in the Four Worlds 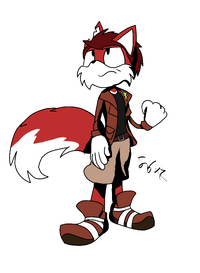 Fox is a tall Mobian red fox with russet-red fur, dark brownish-black hands, feet, and ears, and white fur running from his chin to his underbelly, as well as on his tail-tip and inside his ears. Unlike typical red foxes, who have yellow, brown, or amber eyes, Fox has green eyes. He has a notch in his right ear, four scars on his belly, and wears a black t-shirt, beige cargo shorts, and an open brown leather jacket.

Fox is known to be incredibly short-tempered, cold, and even rude sometimes. At best, he is quiet and often keeps to himself. At worst, he will explode and snap at everyone around him

Fox prefers to hide his true feelings. He is, however, willing to acknowledge admirable traits in other people, albeit grudgingly.

Born as Red to Torch and Sadie, Fox lived a mostly peaceful life in his early years. He was the the latest in the line of descendants of Redstone the Fox, whose bloodline was considered "cursed" by others of the forest, through his father Torch

When Red was a young cub, Eggman visited his family to attempt to regain Torch as his assistant. This failed, leading to an attack that claimed the lives of Torch and Snow. Sadie vanished, and Red was left orphaned and on his own.

Red was taken in and cared for by a friend of Torch's, a hedgehog named E.J., until his teen years. When Red reached his teenage years, Eggman recruited him under the threat that he would suffer the same fate as his family

During this time, Red would suffer constant physical abuse by Eggman, often being the target of a rage-fueled beating. Red was also tormented by nightmares of Sonic.EXE, who taunted him with his involvement in Torch and Snow's deaths

When Red tried to escape, he was stopped by Shadow, resulting in Red getting beat badly. Later, while sent to help an Eggman outpost on Angel Island, Red escaped and sheltered with the Red Fox Pack living on the Island

After some time, he eventually left, taking up a new name and gaining a companion in Sky the Falcon. After visiting Soleanna Forest, Fox gained some help in forming a Team to fight Eggman, naming them the Storm Fighters.

Fox originally had two other children, Kevin and Rose, who were completely removed.

Fox was initially designed with three long scars on his face and three on his neck, but these were removed and later replaced by his belly scars in The Legend Begins.

Despite his cold and emotionless attitude, Fox still greatly cares for his warriors, so his greatest fear is losing them.

Had Eggman left Fox's family alone, chances are the Storming Alliance would never have existed

Fox has a Sonic X counterpart named Red(Fox's original name), who shows flashes of Fox's harsher attitude and hatred of Shadow the Hedgehog

Retrieved from "https://sonicfanon.fandom.com/wiki/Fox_the_Brave?oldid=1874797"
Community content is available under CC-BY-SA unless otherwise noted.