I'll bring you happiness, whether I like you or not!

Flower is a Miran fox with peach colored fur. Her muzzle, inner ears, and the tip of her tail are all white. She has oval shaped greenish-blue eyes, and her nose is black. Her dark bown hair reaches her hips, and she has bangs that cover the sides of her face.

Flower is a friendly, kind natured type of girl. She normally keeps quiet and to herself, not daring to interact with strangers. She may seem a little strange when first meeting her, but after a while she'll become one of your best friends.

Because of her strong love of plants, she may catch herself constantly babbling about them, which is easily irratating to her friends. It's no different with geography. The only person who actually sticks around and can take her babbling is Tails, one of her closest friends. Both of them share a love for mechanics, helping them bond better.

Don't be fooled by her playing dumb, she's a really bright gal! In fact, she knows a lot more than the average fifteen year old. Actually, this isn't always an advantage. When meeting new people, she may develop suspicion, due to her over-thinking. This may cause many people to find her odd. This also isn't always a bad thing. She can also find enemies this way.

Her over-thinking is caused by her many enemy encounters, so really, she knows every trick they have up their sleeves. Sometimes, her over-thinking causes her to lose friends, and leaves her with no choice but to try and regain them back.

Many people find her very boring, or uninteresting at first sighting, which is why she tries her best at improving her magic skill to impress them. Once they've gotten a glimpse of her magic, they constantly ask how she knows how to use magic, which sometimes causes trouble. She unintentionally brags, causing her to blurt out the secret to her magic. Her amulet, she kept after her parents died, is the reason she can use her magic without it glitching. This causes rumors to spread, and for Eggman to find out. Her amulet contains almost as much power as all seven chaos emeralds, which is 'close enough' in Eggman's eyes. At times, she has to hide her amulet just so Eggman doesn't get a hold of it.

She never thought of a guy having a crush on her, or guys in general. That was, until Tails came along. Everytime she came near him, her heart fluttered, and she couldn't help but make a fool of herself. No matter how hard she tried to not make it obvious she liked him, she always seemed to show a bit of her emotions...One of her biggest fears is for him to find out that she likes him. Please don't tell him!

Flower wasn't born on earth. She was actually born on planet Miran, in Mira City. She isn't your average fox. She is part Miran, part fox, or an 'alien'. She was one of the most well known residents in her home town, considering she was the daughter of the King and Queen. She was sent to earth when her parents were held hostage by Robotnik's crew, and eventually murdered. Robotnik destroyed her planet, leaving only an amulet, which Flower kept as a reminder of the tragic story.

Her closest friend. He protects her and gives her lots of advice, including love advice. He's like an older brother.

Her love interest, including one of her best friends. He marries her at the age of eighteen and has two children.

Her 'wingman', or in this case, 'wingwoman.' She's Flower's one way ticket to Tails' heart, or atleast, that is what she attempts to do..She often embarrasses Flower by trying to set her up with Tails.

Knuckles never trusted Flower, even from the beginning. Although he is often rude to her, she still has a friendly place in her heart for him.

Rouge and Flower aren't really that close. Rouge refers to her as 'the most nerdiest girl I've met'.

Flower and Cream have been best friends since they met, even if Cream's habit of picking flowers annoy her.

Charmy isn't that close to Flower. He likes to annoy her but other than that, they don't even speak.

She refers to him as 'too serious' and tries to cheer him up. Her attempts fail many times, but sometimes she actually gets to see his fun side.

Flower brought her back to life with her magic, and they became good friends. Tails didn't have any further feelings for Cosmo, except for friendship.

Same with Espio, except, sometimes she actually gets her feelings hurt while attempting to cheer him up.

She rescued her from a robot, and returned her to Cream, which is how her love for chao started.

They met in the jungle, greeted each other, and became good friends.

"I'm Flower, what a pleasure to meet you!"
—Flower's intro

"Oh no..we've gotta do better than that..."
—After getting rank E

"Not the grade I was expecting..."
—Flower after getting rank D

"Is there by any chance we can turn this 'C' upside down, and draw a line.."
—Flower after getting rank C

"B for brilliant!"
—Flower after getting rank B

"A FOR AMAZING!"
—Flower after getting rank A

"S for significant! Piece of cake!"
—Flower after getting rank S

"TAILS! I need your genius! Wait..that didn't come out right..."
—When Flower is confused during a mission.

This is Flower's original design, except this is the second look.

Flower and Tails share strong emotions for each other, but are far afraid to admit it. They keep their feelings from each other, until their eventual first kiss, which is when they both turn fifteen. In the future, when Tails is 18, they will get married, followed by two children when they are twenty-one. 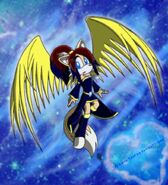 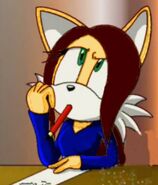 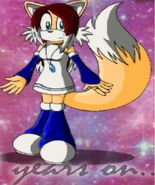 Flower after she marries Tails

Flower with her full length wings 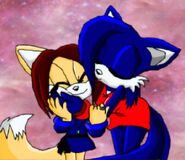 Flower and her older sister Janet
Add a photo to this gallery
Retrieved from "https://sonicfanon.fandom.com/wiki/Flower_The_Fox?oldid=1623557"
Community content is available under CC-BY-SA unless otherwise noted.