Flower "Karina" Prower or Karina Prower is from the future and is the daughter of Cream and Tails.

She has a chao named Halo that evolved into a Legendary Chaos Chao. Karina is a 8-year-old who has neon blue fur and neon pink ears.

Karina used to be nice, and caring just like her mother (Cream) and also, brave and smart like her father (Tails) She wasin't always this color she used to be orange yellow , on the ears, a yellowish cream and her eyes where a sky blue but she still wore the outfit she's wearing now. Karina wanted to be like her dad so sinced she loved neon colors she made a machine that could make her room diffrent kinds of neon colors. When she was done making the machine, Karina was going to try it out to see if it worked or not. The small machine worked but when the room was colored with her! She now has neon blue fur and on the ears where a neon pink and mysteriosly her eyes where colored a neon green. No one knows how where eyes wher colored neon green.

Karina is a neutral in this. She's headstrong, a bit of a pain, niave, and cocky. These kinds of additudes could get her into ALOT of troube. Her super-form makes an apperence called Chaos Karina where she has four Chaos Chao (fourth's Halo, being a Legendary Chaos Chao) flying around her (simalar to Super-Tails having four flickys flying around him).

Karina has a red tank top with blue shorts. She has purple wrist bands and oversized yellow boots. She sometimes wears an orange hankerchief that she wears backwards.

Karina has many reactions with other characters.

Blaze the Cat Bean the Dynamite

Karina has the ability to fly with her ears just like Cream but scince Karina's ears are longer than Cream's, she can fly longer. Karina has the ability to understand chao language. Karina also has an ability called "Halo Tag Attack" it's kinda like Cream's "Cheese Tag Attack" but a bit more powerful. She has a more powerfull but thats called "The Ultimate Sha-Sha and Halo Tag Attack" where she throws both Sha-Sha and Halo and they both start to attack the person (or robot) she aims at.

" I coudin't beleive you lost to an 8-year old but hey, it could happen."

"If I'm this strong, I could even beat Shadow!"

"Brittney, your such an idiot!" 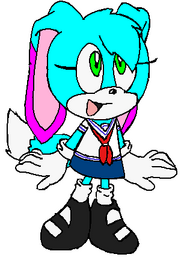 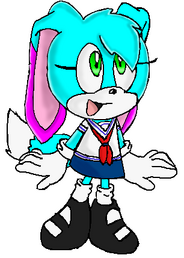 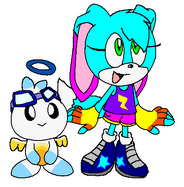 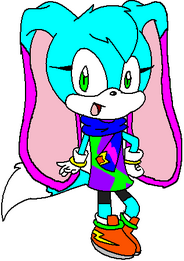 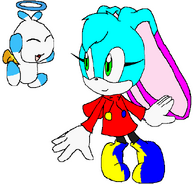 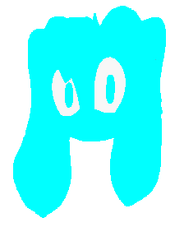 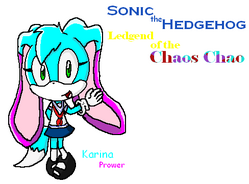 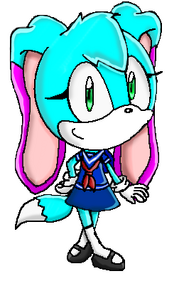 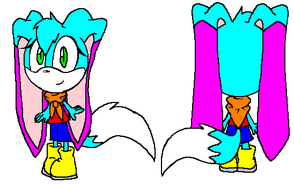 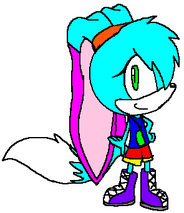 Karina as she looks in Karina's Island Party! 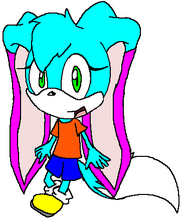 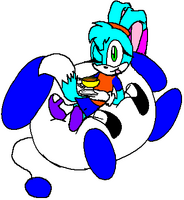 Karina on a ChuChu Bean Bag 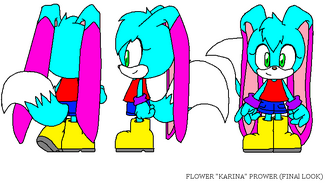 Karina's New and FINAL Look
Add a photo to this gallery
Retrieved from "https://sonicfanon.fandom.com/wiki/Flower_%22Karina%22_Prower?oldid=1574746"
Community content is available under CC-BY-SA unless otherwise noted.