hmm....well,i guess this is the place

a indigo hedgehog with pink goggles,earings with hearts on them a yellow,red and orange collar,a purple coat,a lime under shirt a blue tank top a diamond-shap neckales yellow rings and pants with light-blue shoes

birth place:mobius (in the future)

NOTE:THIS IS NOT THE CREATOR'S ACTUAL BACKSTORY THIS IS ONLY FOR THE CHARACTER

in the future blaze and sonic started dating

when flare was 2 years old when blaze was taking care of her elise died and released iblis it was destroying cities,burning down houses and killing many people blaze and sonic didint wan't flare and her brother to get hurt so they used a time remote to go back in the past leaving flare and blaster a door step

when flare was 3 years old there was a robbery this caught the eyes of balster the hedgecat he went to see what was going on till the criminal found him he tried to escape but he got caught blaster screamed for help lily and jake saw what was going on they tried to get blaster but the criminal escaped lily and jake didin't know what to do but call the police the police had bad news,they coulden't find the theif or blaster so they had to take close care of flare they also tried not to be over protected

(yeah i decided to think of another one soooo WIP)

(i decided to do a new story for this one)

she is pyrokinetic,so she has psychic control over fire

spindash-she curls up into a ball and tackles her foe

fire sphere-blasts a sphere of fire at her foe

the main theme of flare the hedgecat

a demon's fate by within temption (dark theme)

not bad we should do that again *thumbs up*

goes on her kneens* aw man

here this will help

ok im back in action!

getting an S rank:

getting a A rank:

getting a B rank:

well i could do better next time *waves and leaves*

getting a C rank:

getting a D rank:

getting an E rank:

OUT OF MY WAAYYYY

i told ya to get ready!

hey! that wasent hard nor easy

like sonic she cant swim,although it doesen't kill her (olbivous)

Flare went through alot of revamps, no seriously.. problably like 20 times

Flare is the fursona of her creator because she shares some of the hobbies and what she likethat her creator has/likes (example:drawing,pokemon,ice cream,)

Flare is a very sleepy character,this is proven because she doesen't even bother to get up once shes in bed

flare in sonic riders (base used) 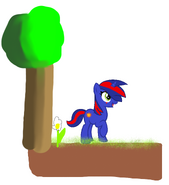 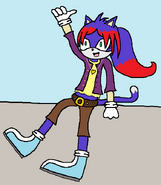 apperantly one of Flare's forms her skin goes from indigo to red,orange and yellow this is activated by the seven sol emeralds this also activates the attack mega burst

(add your avatar or whatever if you see me as a friend!)

feel free to add,just make sure to link the character's page if he/she have one

these 2 pyros love hanging out

well they mostly have like a sister-to-sister relationship Roxy is more like a sidekick/supporter to Flare, roxy may be young,but she is strong along with her chao,Glaze the sparkle chao and her very first best friend

(add your avatar here if you see me as a rival!)

(NOTE:look in the history "Luna's first encounter" to see why they are rivals) Flare really hates Luna,they would always fight and Luna would always brag infront of Flare also

(add your avatar here if you see me as a enemie!)

It doesen't matter if you win,just have fun!

Retrieved from "https://sonicfanon.fandom.com/wiki/Flare_the_hedgecat?oldid=1623272"
Community content is available under CC-BY-SA unless otherwise noted.