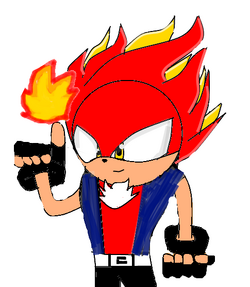 Flare has the fur with the color pallete of a fire. Yellow, Orange and Red. His hair is usually spiked up, and he has a lot of quills. Each row of quills has a different fire type color. Flare wears a reddish metalic colored armband with a certain code on it. The code is EA#2, which stands as a sign of being second of command in the Elemental Army. Flare also wears a short cut off denim jacket, a black shirt, a white belt, and one black glove.

He usually has a hot-headed, cocky, rash, fiery, rebellious, narcissistic type of attitude. He is rather sarcastic, and can be really hard to hang out around if you don't like those who are self-absorbed. He is either constantly bragging about how he's the self-proclaimed greatest elemental fire user ever, talking about how he's the "ultimate mobian." or his no-loss streak, even though he's only fought Venus, his sister who represents the element of grass and Ice, whose name is obvious to what element he is representing. He refuses to fight Hydro, the third strongest element user in the family besides Lightning, and Rock.

Flare was raised in a family of 6 brothers and 4 sisters. He was always training with his father, and would always hang out with his father, because he had a strong bond with his father. As a child, being the 4th oldest in the group, he was rather stronger and always messed with his little brother and sister until he got a bit rebellious.

Retrieved from "https://sonicfanon.fandom.com/wiki/Flare_The_Inferno_Hedgehog?oldid=1829897"
Community content is available under CC-BY-SA unless otherwise noted.